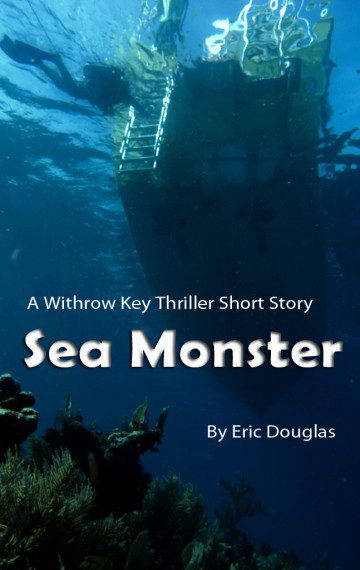 Walking Bob, a local hermit, is hearing noises at night and is scared enough to break his routine. He leaves his island and comes to Withrow Key to let Jackson Pauley know about a “sea monster” out on the ocean. Realizing there is something scaring the old man, whether it is a sea monster or something more mundane, Jackson decides to investigate. Jackson recruits Randy Littlebear to go sea monster hunting with him and they almost run into more than they bargained for beneath the waves.

This is the sixth Withrow Key thriller short story. Set on a bypassed key in the Florida Keys, life moves a little slower and a little weirder.

Each Withrow Key thriller short story features scuba diving, adventure, boats, the ocean and mystery along with beautiful locations and scenery. Jackson Pauley and Randy Littlebear go hunting for a Sea Monster and are surprised by what they find is traveling through the warm waters around the Florida Keys.

This was an awesome book. But it would be a bit Better if there was really a sea monster and that they would dive down and see it an then … the rest should be a surprise. Anyways this was one o the best books I’ve ever read!!! : ) : ) : )

I’ve always enjoyed Douglas’ writing and this is no exception. Crisp and fresh it keeps you waiting for the next page. I’m glad that he has them available on Kindle now!

Walking Bob, a hermit who squats on a tiny island in the Keys, has seen something that spooked him so badly that he left his private refuge to seek help tracking down the `sea monster.’ A local scuba shop owner and an Indian Affairs cop stake out the area to solve the mystery.

Mr. Douglas has a clean, easy-to-read style. He tells a good tale, using his knowledge of the area and his experience with diving to make this short story come alive.

I”m not much of a reviewer, but was a fun story that verges on a very possible reality in the Key’s. I hope to see the characters again, if they don’t already have another adventure in publication. I also normally read my books in a more traditional format, but using the Kindle Application on my I-Pad or my Motorola android Xoom was pretty cool too.

When you are stuck on dry land, this is a quick fix to your need for underwater adventures! Written in a way that makes you feel like you are living the adventure!

I am not a diver–and while I expected to be slightly entertained by this novella, I didn’t expect to enjoy it this much! Sea Monster took me out of the mountains of West Virginia to the Florida Keys. I ignored the family for an hour and read this story. Characters are developed enough that I care about them — one of my concerns as I thought about a novella. Sea Monster a great little escape at a great price.

Even if you’re not a scuba diver, you will appreciate the adventures of a dive shop owner in the Florida Keys in this mini novel. Along the lines of Clive Cussler this story offers adventure under the surface and memorable characters. It’s a quick read, perfect for your surface interval..