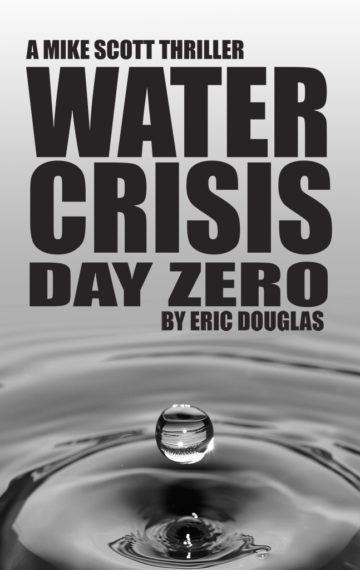 Amazon Kindle and SoftcoverBarnes and Noble

This is the 10th Mike Scott thriller in the series.

Listen to Eric discuss the book on ScubaRadio

Water Crisis: Day Zero does more than just provide solid thrills. It will make you paranoid about the world we live in.

In our present day of sociopolitical and environmental nightmares we tend to stick our heads in the sand, avoiding real issues. We seek entertainment and escapism as antidote to what we don’t want to see in the real world. Eric Douglas tricks us into both with his new Mike Scott novel, Water Crisis.  Through his smoke and mirrors of escapist adventure, Douglas back doors us into two of the greatest threats we face. While having a heck of a lot of fun!

For my money, Water Crisis the best Mike Scott book yet.

‘Water Crisis, Day Zero’ is a taut thriller with an interesting cast of characters and page turning plot twists. I finished the book anxious to find out what might happen next to Mike Scott, et al. Do not keep us waiting too long for the next adventure, Eric!

Ripped from the latest environmental headlines with attention to high tech and geographical detail, Mike Scott’s latest adventure really has you question what Author Eric Douglas has imagined and what could quite possibly be real. 2 big fins up….again!