You are here: Home / Non-fiction Books / For Cheap Lobster

For Cheap Lobster by Eric Douglas on Vimeo. 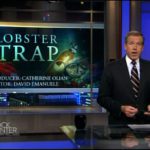 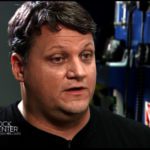 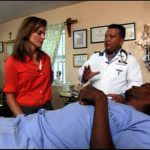 I traveled with a crew from NBC and was interviewed on camera (this is an excerpt, the complete story is no longer online): Lobster Trap from Rock Center with Brian Williams. It won the 2013 RFK Book and Journalism Award for International Television.

I was also interviewed in the studio for CCTV’s story “Dangerous Prize” broadcast 4/16/2012.

Profile of Dr. Elmer Mejia from The New York Times (used my photos)

Read a highlight of this project on the National Geographic website.

Read a longer report on Honduras and Isla Natividad from Alert Diver magazine on AlertDiver.com. There are two articles and a photo essay of 18 images online. 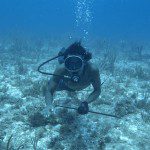 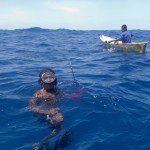 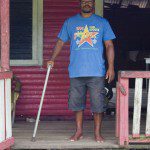 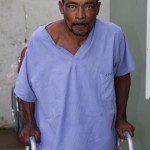 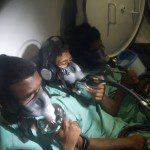 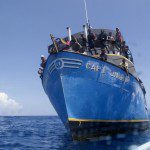 All over the world, men harvest the sea, using scuba equipment or compressed air systems connected to the surface with an air hose and a mouthpiece. These divers face injury, paralysis or death without truly understanding the forces at work on their body. They dive for lobster, sea cucumber, conch or other sea snails, abalone and even algae to feed international markets. Generally, they have little or no training, minimal equipment lacking depth or pressure gauges or timers and little access to medical care when they do get injured.
In 2010 and 2011, Eric Douglas traveled to Honduras, Baja California Sur, Mexico and northeast Brazil to learn about the situations these divers experience and to investigate ways to help. He is working to raise awareness about this diving, public health and safety issue using photographs, video and first-hand accounts to educate the public on the conditions faced by these divers.

Decompression sickness (DCS), commonly referred to as “the bends” is a condition caused by exposure to depth and pressure over a given amount of time. While under this exposure the body absorbs nitrogen from the breathing air. On ascent this nitrogen comes out of solution as a free gas a forms bubbles in the blood and tissues. Under ideal decompression circumstances, the lungs remove the excess nitrogen in a dissolved phase, without forming bubbles. When the diver spends too much time at depth, this nitrogen can’t be off-gassed during ascent without forming bubbles, unless the diver spends significant times at decreasing depths on what is known as ‘decompression stops’ before returning to surface. These bubbles can restrict blood flow, cause joint pains or can appear de novo in peripheral and central nervous system tissues causing tissue disruption that will initially show as weakness, numbness or paralysis.

First aid treatment for dive-related injuries includes breathing 100 percent oxygen to help the body wash out the excess nitrogen. Hyperbaric Oxygen Therapy (a.k.a. recompression treatment) is the definitive treatment for DCS. This must be done in a hyperbaric (high pressure) chamber while breathing 100 percent oxygen. This serves multiple purposes; moving the nitrogen back into solution; speeding oxygen to damaged hypoxic tissues; and aiding the inflammatory process.

Of the three populations of divers Douglas worked with, the Miskito Indians from the La Moskitia region of Honduras are by far the most troubling. Miskito Indians dive for lobster eight months out of the year, catching them by hand. The other four months of the year, smaller numbers of divers harvest conch using the same aggressive diving techniques.

They make eight to 12 dives a day to more than 100 feet, waiting until the tank is nearly empty to ascend rapidly to the surface where they change tanks and repeat the process. And they do this for 12 days in a row, living in squalid conditions on board boats filled with 100 or more people and no sanitation two days from land and four days from medical treatment in La Ceiba, Honduras. They also work very hard while at depth, swimming quickly to find the lobsters or hammering the conch shells to remove the animal from its conch. This additional work load may cause them to absorb even more nitrogen.

These divers are paid by the pound for their catch, encouraged to dive and usually ignoring minor symptoms, only raising concerns when they feel significant pain, are clearly too weak to keep on diving or can no longer walk.
There are more than 2000 Miskito Indians living in the region who are members of the Association of Handicapped Miskito Indian Lobster Divers. The association directors do not believe they represent all the Miskito Indians who struggle with some form of paralysis brought on by diving. There are still more divers living in remote villages without electricity or running water that don’t make it into the rural, dirt-street “capital” of La Moskitia, Puerto Lempira. The association members also know of another more than 400 divers who lived through their injuries to return to their villages, but later died at home.

Miskito Indian divers like “Billie” don’t stand much of a chance of regaining any quality of life after their injuries. Billie was on the 8th day of a lobster trip. He made a dive to free a tangled boat anchor, descending quickly to the bottom, struggling with the anchor and then rapidly bolting to the surface where his symptoms appeared quite immediately. He arrived at the chamber four days later, after being taken to a small island and flown to La Ceiba, paralyzed from the mid-chest down. He had lost bowel and bladder control. After receiving a several treatments in the hyperbaric chamber, and regaining some feeling -but neither the use of his legs or the ability to urinate on his own- Billie’s family decided to take him back to La Moskitia to be treated by a bush doctor.
Billie’s chances of long-term survival are slim. Aside from his inability to walk or work, he’ll probably need a catheter to urinate for the rest of his life. With this condition he faces significant risks of secondary complications which could potentially cost his life in a couple of years without adequate medical supervision.

Marine Protected Areas, such as the one near Isla Natividad in Baja California Sur, Mexico have helped shore up the depletion of the fisheries and the natural resources. However, each year the divers have to dive deeper to fulfill their catch as shallower waters become depleted. In Isla Natividad, the divers belong to the Cooperative of Divers and Fishermen. They said they have had to go deeper to find sea cucumbers and other harvest animals. The cooperative ended their dive season early this year rather than continuing to expose their divers to increased risks. This overfishing has long-term affects on environment as well, stripping the bottom of the reproduction age animals.

Harvesting lobster using compressed air in Northeast Brazil, in the Rio Grande do Norte region, is actually illegal, yet the divers collect more than 6000 tons of lobster annually for sale to foreign markets. In spite of the legal embargoes on fishing for lobster, the environmental organizations lack the ability to adequately patrol the coastline to enforce the laws. Diving for lobster has the highest incidence of workplace injury of any occupation in the region.

Commercial Divers are professional divers who dive on oil rigs or perform bridge inspections, with significant safety procedures in place. Harvesting divers have similar dive profiles and exposures, but they typically don’t have any formal training and for this reason they face higher risks on similar dive exposures, since they dive without those comfortable safety measures.

“I want to tell this story to tell the human perspective on the problem. I want to show people, divers and non-divers, the human faces of the men who harvest the sea, but sacrifice their health and their lives to do it,” Douglas said. “A pictorial approach allows me to put a human face on a terrible problem.”

Douglas’ work with the Miskito Indians and other harvesting divers was carried out as part of the Divers Alert Network Harvesting Diver Project when he was the Director of Education at DAN. In June of 2011, Douglas worked with Dr. Elmer Mejia in La Ceiba, Honduras, to conduct training for 54 dive boat captains and owners who control the commercial lobster boats fishing off of Honduras. This training was organized by Dr. Mejia and the boat owners association. Each boat captain received training in oxygen first aid, additional details in dive accident management including a discussion of first aid kits and training in the administration of Foley Catheters. Dr. Mejia reports that while the numbers of divers injured this year remains consistent with those injured in 2010, their outcome and response to treatment has been significantly improved as the divers have received better care immediately following their incidents.