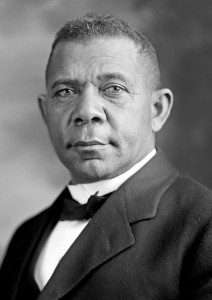 Researching an upcoming project, it occurred to me that I didn’t know much about one of the most famous West Virginians of his time; Booker T. Washington. He wasn’t born in West Virginia, but spent his formative years here, working in the salt industry and coal mines after the civil war. After he attended school in Virginia, he returned to his family home in West Virginia to teach school for a while. I decided to read his autobiography Up From Slavery and was surprised to find it free as a public domain work for Kindle.

After emancipation, Washington’s family moved to Malden to work at the JQ Dickinson salt works. From there, he struggled for an education, moving to the Hampton Normal and Agricultural Institute and eventually being asked to begin the Tuskegee Normal and Industrial Institute in Alabama.

About a third of the way through the book, I was thinking to myself how much I want my daughters to read this book. The lessons he returned to, over and over, were the idea that education without hard work meant nothing.

“At Hampton I not only learned that it was not a disgrace to labour, but learned to love labour, not alone for its financial value, but for labour’s own sake and for the independence and self-reliance which the ability to do something which the world wants done brings.” 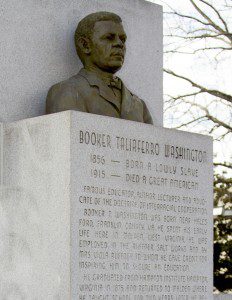 His own admission into the Hampton school hinged on how thoroughly he cleaned a classroom, for example. That was after journeying several hundred miles to get to the school, alone and hungry. He slept under a raised sidewalk for several nights, while working during the day, to make enough money to finish the journey. He told the story of returning to Richmond for a speech and how he couldn’t help but thinking about that spot under the sidewalk.

“At that institution I got my first taste of what it meant to live a life of unselfishness, my first knowledge of the fact that the happiest individuals are those who do the most to make others useful and happy.”

I understand that some didn’t agree with Washington’s thoughts on racial equality during his time. I can’t think of anyone who is universally loved and agreed with and that’s not what struck me. It seems like, more than 100 years later, we could all learn lessons from him about the value of hard work, and the rewards that come from it.

He also said something that stuck with me about “getting along.” It is a choice we make.

“It is now long ago that I learned this lesson from General Armstrong, and resolved that I would permit no man, no matter what his colour might be, to narrow and degrade my soul by making me hate him.”.