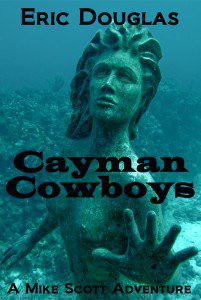 The third excerpt from Cayman Cowboys for Excerpt Friday.

Mike checked the video camera to make sure it was working and was amazed to see the quality of the picture through the LCD port on the back of the video camera housing. Not wanting to waste batteries he didn’t run it for long, but he quickly realized they would easily be able to capture whatever was going on—assuming they were there at the right place at the right time. From there, it was simply a matter of swimming and waiting.

About an hour passed before anything happened. Mike was beginning to have doubts they had guessed correctly. Both divers realized at about the same time that they were hearing the sounds of a small boat, or at least a propeller. Before long they realized there were several propellers churning through the water. Direction is hard to determine underwater, but the relative quiet and the concentration of noise from the multiple propellers gave them a general direction to search.

Kelly took the lead as the two divers slowly and cautiously moved toward the noise. Another 15 minutes of swimming passed before they found what they were looking for. And both of them were amazed. They saw four divers with scooters and what appeared to be a small tourist submarine hovering over a patch of coral. The sub had specially diffused lights that reduced the amount of light that leaked toward the surface.

But what amazed Mike and Kelly more was what the divers were doing. The submarine actually had claws mounted below it and it was ruthlessly tearing through coral. The divers were following along, pointing out things to the sub pilot and picking up items and putting them in baskets on the sub and attached to their scooters.

“Believe?” Kelly scribbled to Mike on the slate.

“No. Amazing.” Mike wrote back as he juggled the video camera.

Mike and Kelly moved as close to the demolition zone as they dared and Mike kept the camera going. Kelly kept a look-out and made sure they weren’t noticed. After approximately a half an hour, and several moves to avoid detection and get better camera angles, the pair moved away from the scene. Mike had all of the evidence he needed to show something was going on.

Unfortunately, the masks the divers wore blocked out their faces so no one could be identified, but the submarine would be traceable. Regardless, they would be able to force the authorities to investigate and admit something was happening.

Underwater for about two hours, Mike and Kelly realized it was much too early for the yacht to return so they headed toward the shore. The swim to the beach took more than half an hour, but it still made more sense than waiting for two more hours, especially when there was something going on. They both wanted to get in and contact the authorities immediately. About 50 yards from shore, Kelly surfaced to find a good exit point. He saw what appeared to be a small beach area about 100 yards away to the right, took a compass heading and descended back to join Mike. The divers then changed course and headed for the beach. In full scuba gear, it is much easier to swim underwater than on the surface, so they swam on the bottom almost until their heads were sticking out of the water.

As they climbed up the rest of the beach through the light surf and out of the water, tired and a little cool, they were able to talk to each other for the first time. And while they kept their voices down, they could barely contain their excitement.

“Do you believe what we just saw?” Kelly asked.

“Not at all. What do you think they were doing?” Mike replied.

“I have no idea. But they were sure tearing up the reef. That sure helps to explain a lot of what’s been going on around here lately,” Kelly said.

As they moved up the beach, Kelly spotted a log for them both to sit down on. They both began to strip out of their dive gear.

“So how do we signal Tanya?” Mike asked. He hadn’t thought about it earlier.

“I have my ways,” Kelly said, playing with Mike.

“Care to share them with me?” Mike asked in response, with more than a little irritation in his voice. He really wasn’t in the mood to play.

“I have a converted emergency signaling device. We use it from time to time around the shop on special dives. The moment we broke the surface, it began sending out a signal. This one, though, operates on a non-emergency frequency. Tanya will be able to track it using a direction finder. Considering how early we are, she’ll have no doubt we are on the shore and come looking for us.”

“Now I’m impressed. How’d you come up with that?” Mike asked.

“What? You think you have all the fancy toys?” he said as he gestured to the video camera Mike had sat on the sand beside the log. “Actually, I hate to admit it, but it was Tanya’s idea. She had seen the personal EPIRBs that send out an emergency signal for lost divers, and the ones on the boats that send out a signal when a boat sinks so rescuers can find them. She got the idea to adjust one to a different frequency to use it in situations sort of like this.”

“Are you in situations like this a lot?” Mike asked, somewhat surprised. “If so, I think there’s a lot you aren’t telling me about your life here on the island since I left,” he said with mock seriousness.

“Well, not like this, but there are times when we need to find each other and can’t just pick up the cell phone,” Kelly said.

Before Mike or Kelly could react, two men jumped out of the shadows behind them. Both divers were knocked unconscious and bound tightly before they could struggle.

“So now what do we do with them?” one of the men asked.

“The boss said to bring them to him,” the other responded.