Update: The BBC posted this story on their website about Antonio Williams and Steve Lovell’s efforts to get the grave restored and rededicated. 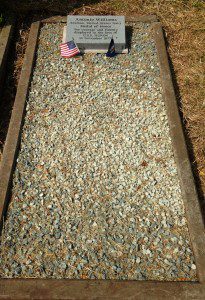 For more than a year, Bristol, England resident Steve Lovell has made it his personal mission to restore the grave of Antonio Williams, buried in the Greenbank Cemetery in Bristol. Williams received the Congressional Medal of Honor for his actions during the sinking of the USS Huron off the coast of North Carolina in 1877. He is the oldest person to receive the medal; he was 51 at the time. Born in Malta, Williams was a naturalized US citizen who married a woman from Bristol and retired to England after he left the Navy. He died in 1908 and was buried with full honors. Over the years, his grave fell into disrepair. 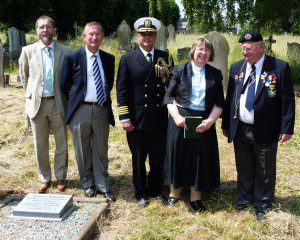 And that is when Lovell stepped in. A Google search of distinguished burials in Greenbank led Lovell to Williams. Visiting the grave in February of 2013, Lovell saw that it had not been tended in years and the gravestone was missing. Working with the Congressional Medal of Honor Foundation, Lovell got a new headstone placed on the grave and on Monday, June 23, Lovell assembled a group to rededicate Williams’ grave. In attendance were:

A crew from BBC Bristol broadcast  this report on the ceremony.

Lovell contacted me when he was researching Williams as the sinking of the USS Huron was the foundation of my novel Wreck of the Huron. I used the Proceedings of the Court of Inquiry on the loss of the Huron from December 5, 1877 into the sinking of the ship for much of my background information, but sadly Williams wasn’t in the book as he was still in the hospital recovering from injuries sustained that night and wasn’t interviewed in the inquiry. I’ve written about Williams a couple times and Lovell’s progress.

The USS Huron went down November 24, 1877 in a storm off of Nags Head, North Carolina. The ship and her crew were headed to Cuba to perform environmental surveys and ran aground. Of 132 crew and officers on board, 98 drowned. They were only about 200 yards from the beach, but the US Lifesaving Service was not at that time functioning year-round and there was no one there to help. That wreck of the Huron and another shipwreck several months later prompted congress to fund the lifesaving service 12 months out of the year.

I think it is amazing that Steve Lovell went to this amount of effort to recognize and remember an American sailor and hero. He deserves all the recognition possible and the thanks of every American.

P.S. The Medal of Honor Historical Society used my blog about the grave dedication ceremony for Antonio Williams in England. 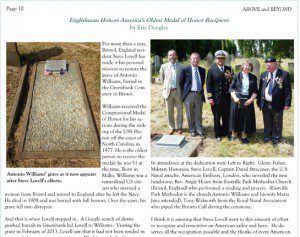