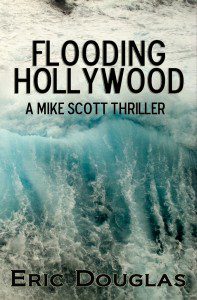 This is the third excerpt from Flooding Hollywood. It is the second novel from the Mike Scott series.

Mike reached out and gingerly pulled the detonator out of the plastic explosive bundle. Realizing that the detonator was a small bomb itself, Mike picked up the timer. After a second, he found a switch and turned off the timer as well. It was then that he realized that only a few seconds remained on the countdown. They surely would have been killed when the blast went off underwater. The shock waves and concussion would have knocked them unconscious, even if they weren’t close to the actual blast. And that was assuming that the water wouldn’t have swept them quickly through the gap in the wall and down into the valley below.

After a second, Mike looked up to see Diane beside him. He gave her a big smile behind his regulator. Giving her the OK signal and then the thumbs up signal to ascend, she agreed and responded with an OK back. Mike grabbed his pressure gauge to see how much air he had left. He confirmed that it was time to get on the surface—immediately. They had been underwater for more than twenty minutes and had gone fairly deep; they were more than eighty feet down when they found the bombs. Their air supply was running low.

Carrying the detonator with them, Mike and Diane began swimming for the surface. Looking up as he ascended, Mike saw two divers descending toward them. Guessing they were members of the police dive team, Mike handed the timer and detonator to Diane and signaled to them, using his arm and then his light. The two divers altered their course and headed straight for Mike. As the men got closer, Mike began to have second thoughts about the identity of the other divers. As the gloom parted and the men got close, he realized it was the terrorists coming back. They had been watching the lake and returned to make sure the bomb went off as planned.

The first diver to reach Mike struck him across the face, dislodging his mask. Mike floated backward as he struggled to get his mask back in place and get his breathing under control. Every diver learns to clear water from his mask in case it was accidentally knocked loose, but the swiftness of the attack caught Mike completely off-guard. It took him a moment to get himself stabilized.

The second diver grabbed Diane trying to get the detonator and the timer away from her. She grappled with the man, fighting back. She was strong and wiry, but the diver began to get the better of her. The only thing in Diane’s favor was that the man didn’t have any leverage. The man pulled on Diane, but he turned himself in the process. She was able to twist herself around to keep the man from getting a firm grip. They continued to spin in a circle.

The first terrorist, the one who struck Mike, chose not to help his friend, assuming he could handle a woman, and swam away to check on the bomb.

As soon as Mike got his mask straight, he swam back into the fray.

As he arrived at the scene, Diane turned her body hard, rotating her attacker directly in front of Mike. Mike quickly latched onto the man’s tank with his knees and began turning the knob to close off the terrorist’s air supply. With his free hand, Mike also returned the favor given him by the man’s accomplice by pulling the terrorist’s mask off of his face.

It took a few seconds for the pressurized air in the hose to be completely exhausted, even after Mike shut it off. The terrorist diver was able to take one, then a second breath, before nothing came out on his third attempt. The exertion of the struggle with Diane had caused the man to breathe hard—harder than he had realized. When he inhaled against his regulator and nothing came, he was shocked. That shock quickly turned to panic. He couldn’t inhale at all. There was nothing there. He knew he was sixty feet underwater.

Diane was close to panic herself from the attack and the fight. Mike reached out and took the detonator and timer away from her. He started guiding her to the surface. There was another terrorist in the water, but Mike wanted to get the timer and detonator as far away from the explosives as possible. Also, Mike knew their air supply would be dangerously low by now.

Mike’s desire to get the detonator out of the water clouded his judgment. He didn’t look around before he left. If he had done so, he would have realized the first terrorist was right behind him.

The terrorist had checked out the explosives and realized they were all there. Just as quickly, he realized Mike had the detonator and he knew he needed to get it back if the plan were to succeed. The old man wouldn’t tolerate a second failure. He had been very clear about that. Seeing Brother Jack lose the fight and bolt toward the surface, the first terrorist—Brother Darryl—swam straight at Mike.

Darryl grabbed Mike’s fin as soon as he got in range and dragged him back down. Mike turned and twisted, trying to face the diver chasing him. He knew he was going to have to deal with this man, too.

Divers carry knives to cut away fishing line, kelp or other entanglements. It was also a bit of a macho exercise for many men to carry the biggest knife they could find. The terrorist was no exception. He drew his dive knife, revealing its nine-inch blade. He lunged at Mike while still holding Mike’s fin.

Holding the timer box in front of him like a shield, Mike parried the knife thrusts. First one, then another. They circled each other, while Mike tried to stay clear. With a particularly vicious jab, the knife hit the timer’s metal box and twisted to one side. The blade struck Mike’s finger and sliced his hand. Reacting to the pain, Mike twisted away and nearly dropped the timer. He was barely able to hold on with his one good hand, but he wouldn’t be able to block another attack.

Seeing Mike in trouble, Diane moved in and tried to latch onto the attacking terrorist’s back. She planned to do to him exactly what Mike had done to the man coming after her. She tried to get her hands on the knob that would shut off his air supply, but the man kept twisting and turning, preventing her from getting a good grip. She wasn’t able to control him.

All three divers were slowly floating upward and had risen to about thirty feet. Holding his hand in pain, Mike floated backward, moving slightly away from Diane and the terrorist. Seeing Mike injured and moving away, the terrorist wheeled on Diane. He started swimming after her, slashing with the knife. Diane swam backward, trying to stay away from the dangerous arcs of the knife, but she couldn’t swim backward as quickly as the man could move forward. One more swipe and he would cut her too.

As the man lunged forward, confident he was going to knock Diane out of the fight, his head suddenly snapped upward. He looked like a dog who reached the end of his rope. Mike was back. He caught the man from behind.

Knowing they had precious little air left, and not willing to continue this fight any longer, Mike jammed the timer and the detonator between the man’s tank and buoyancy jacket. As he did so, he flipped the switch, turning the timer back on.

With his injured hand, Mike grabbed the man’s power inflator on his buoyancy jacket. It took all his concentration to make his injured hand squeeze the button that would fill the compensator with air, making him float toward the surface.

Diane realized what Mike was doing and grabbed the man’s weight belt. She quickly flipped the buckle open and sent the terrorist’s weights dropping 100 feet below.

The additional air and the missing weight belt made the man extremely buoyant. He took off like he was riding an elevator. Unlike his partner, however, he still had air and could breathe. No one had been able to turn off his air supply. As long as he breathed normally and exhaled as he rose, he would probably be fine when he hit the surface. He just wouldn’t be able to rearm the bomb.

He would have been fine, that is, except for the detonator positioned directly against the aluminum scuba cylinder. There had only been a few seconds left on the timer when Mike had turned it off earlier. When he turned it back on, it picked up where it left off and began counting down to zero.

Flooding Hollywood is available in softcover and on Kindle. It is also part of the Mike Scott Boxed set.