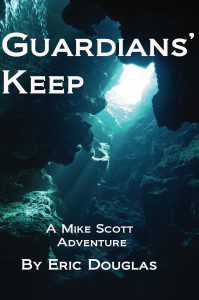 The following is an excerpt from the third Mike Scott thriller Guardians’ Keep.

The rushing stream of passing vehicles almost dulled Mike’s senses to the point that he nearly missed the American SUV coming up behind him much faster than he was moving. He expected the Jeep Grand Cherokee to pass him, but the driver didn’t do it. The Jeep closed in tight behind Mike and stayed there.

Mike accelerated slightly to provide some distance between the two vehicles. His first thought was that the driver just wasn’t paying attention. The Jeep moved close again, tightening the distance to within a few feet and completely obscuring Mike’s view of anything else in the rear-view mirror with its grill.

“Frankie, I’m not sure what’s going on, but I think we’re in for some trouble,” Mike said quietly as he accelerated again. “Do you have your cell phone with you?”

“Sure, Mike, I do, but what’s wrong?” Frankie said looking around at him. She had been quietly staring out the window lost in her own thoughts for the last few minutes. She was thinking thoughts similar to those on Mike’s mind, debating whether this growing attraction between the two of them would work. She had just come to the same conclusion he had; the only thing they could do was give it a shot.

“This Jeep behind us seems to want to play bumper tag,” Mike replied.

“Bumper what?” Frankie said as she turned around to see the SUV bearing down on them. “Oh. Never mind.”

“Try to call the police and let them know something’s going on. You might have to explain who you are and the events of the last couple of days. This could be someone trying to get your attention for an interview or something, or it could be some more of Montrosso’s group come to settle the score,” Mike said as both vehicles entered a tunnel. Once inside, the Jeep bumped the Alfa from behind, causing the Alfa to fishtail slightly.

OK, this just got serious, Mike said to himself as he accelerated again. Quickly, he went from being passed, to doing the passing himself.

The two vehicles raced down the Autostrada, weaving in and out of traffic. While the Alfa was more maneuverable, there was no way it could match the power of the Jeep. Every time Mike was able to pull away, the Cherokee quickly closed the distance. Mike began to weigh his options, but none of them looked very promising.

“Here he comes again,” Frankie yelled as they came back out into the bright sunlight, leaving the tunnel. She was frantically trying to dial her phone and watch the Jeep at the same time.

Mike was able to swerve and dodge the collision with the larger vehicle, but he knew he wouldn’t be able to keep it up for long. At this speed, it would take just one lucky shot from the Jeep to send Mike and Frankie spinning out of control and crashing off the Autostrada. He was going to have to make a move quickly.

“Hello, hello,” Frankie nearly yelled into the phone when the police answered. “This is Dr. Francesca DeMarco. I am riding in a car on the Autostrada, about 25 kilometers south of Roseto. A large American Jeep is trying to run us off the road.”

After a moment’s pause, Frankie answered, “Yes, I’m sure the car is trying to run us off the road and no, it’s not a police vehicle. They have not signaled us to stop and there are no lights or sirens.”

“Yes, I am the same Dr. DeMarco that was wounded in the city hall last week. I think someone is trying to finish the job,” Frankie said, jumping to a conclusion, but the only one that made sense. “My friend and I are in danger. These people are trying to kill us.”

Just then, the two vehicles entered another tunnel and Frankie lost her phone signal. The jeep surged forward and Mike was barely able to avoid a solid hit from behind. The Jeep’s glancing blow to the Alfa’s bumper picked up the rear of the car.

“Aaagh,” Frankie growled as she stared at the useless phone. “I didn’t get a chance to give them any more information.”

“Don’t worry about it right now. They aren’t going to be able to help us before we have to figure our own way out of this,” Mike said as he continued to dodge in and out of slower-moving traffic trying to stay away from the Jeep. “Do all of these tunnels have these access areas in them?” he asked as he swerved around a slow-moving bus. In each tunnel, every few hundred yards, there was a passageway that connected the north and southbound lanes and allowed emergency vehicles to pass between. The access ways would also allow cars to be rerouted if the tunnel were blocked. They were only about a car and a half wide, however.

“I don’t know. I think so, but I’ve never really paid attention,” Frankie replied, trying to think. She’d driven those roads nearly every day but she hadn’t taken notice.

“Before long, we’re going to run out of luck. This guy keeps getting closer and closer to a solid hit and one good one is all it will take. I’m going to have to try something,” Mike said as they emerged into the sunlight again. Each time, it took Mike’s eyes a moment to adjust to the bright sunlight from the relative shade of the tunnel. He planned to use that to his advantage.

“Mike, what are you going to do?” Frankie asked, her voice betraying growing fear.

“Better you don’t know, but tighten down your seatbelt and hang on when I tell you,” Mike answered as he rehearsed his movements in his mind, trying to see himself pulling off the stunt before he even tried it.

Mike sped up a slight grade and saw what he was looking for. There was a slow-moving truck in one lane and three cars in the other. Halfway up the grade, Mike saw the entrance to another tunnel.

Mike accelerated as hard as he could, pulling away from the Jeep. He drove straight at the back of the truck in his lane. As he got close, almost too close, Mike swerved into the other lane, cutting off another driver and then rocketed around the truck. Mike was at the lead of the line of cars and the Jeep was at the rear.

From the left lane, Mike swerved to the right, shifted out of gear and pulled up on the emergency brake. It set the Alfa into a four-wheel slide immediately after he entered the tunnel. He was counting on a service access coming up where he had seen them in every tunnel so far. If it wasn’t there, they were going to be in trouble. They wouldn’t have enough speed to get away from their pursuing Jeep again.

He felt the car beginning to slow. He felt the rear of the car start to come around and was just about to spin out, when he saw the access tunnel opening coming up on the left. He jammed the car back into gear and floored the accelerator. As the front wheels began to spin and bite on the pavement, the car moved forward. Half sliding and half accelerating, the Alfa rocketed into the hallway between the lanes.

Seeing Mike disappear through the wall, the big Jeep tried to turn, but there was no way it could maneuver that quickly. The Cherokee slid, nearly turning over, then spun out and slammed into the tunnel wall, facing north in the southbound lanes of traffic. Seeing two cars spin out in the middle of the tunnel caused the other drivers on the road to slam on their own brakes. The southbound lanes of the Autostrada were quickly tied up as one car after another slammed into a tremendous pile-up. The slow-moving truck came to a stop directly in front of the passageway Mike had used to escape, blocking it even to foot traffic.

Mike quickly pulled through the passageway and slipped out the other side, drawing honks and tire squeals from the northbound drivers, but fortunately no contact. He headed back north, toward Roseto. Thoughts of a fun sightseeing afternoon had completely left his mind.