You are here: Home / Books / Memories of D-Day from men who were there

In the West Virginia Voices of War documentary, I interviewed two men who were present at Omaha and Utah beaches in June of 1944. Neither went in on the first wave, but both ended up crossing France and Germany with the Army and were there until the very end of the war.

I finished high school and my number come up and I was drafted. May 7, 1943. I had never been out of West Virginia. They took us to Huntington for examination and they sent us home for a week to get everything in order. A young buck like me, I didn’t have nothing to get in order.

Crossing, I was sick 10 days out of 12 going over. I lived on peanuts and Coca-Cola. Waves looked like they were 40 feet high. We went to Glasgow Scotland and then worked down to Plymouth England. We didn’t know what it was for, but we were loading for the invasion.

We had air raids every night while we were in England. We had air raid shelters. We would go, most of the time you had no clothes on, just in your underwear and grab your pants. People coming in there half dressed.

We just had enough to eat, to keep the hunger down. We went to chow one night; they asked “What do you want to eat?” It shocked us. We said “What do you mean?” We knew something was up but we didn’t know what. It lasted one day and then the next night we shipped out. We went inland to an old camp and then the next morning they got us up bright and early, there was a catholic chaplain and a protestant chaplain. One of them said, “Where we’re going some of you will make it and some of you won’t.” You heard some groans but that was about it. We were not told until we were on that ship getting ready to land what was going on. We knew something was up, but they kept it that quiet. Went in on D-Day.

They took us back to Plymouth and we boarded a ship, #226 on June 4. On #2 hold, it was stacked with 5 gallon jerry cans full of gas. And some of them were leaking. The whole company got on that ship. We were on the channel two full days. We were supposed to land on the fifth but a storm came up and we landed on June 6th. The channel was rough and I was sick.

On the morning of June 6th, we were in the tail of the convoy. We went up by Omaha Beach, but we were going on to Utah. We anchored at Utah Beach and those big battleships were broadside and firing on the beach. You would see the gun go off, and then hear it and then see the shell way back over yonder go off.

I don’t know what time, but an LCP pulled up beside our ship and that was our ride to the beach. It bottomed out and we waded in with water clear up under our armpits. We were in a single line. If there had been a machine gun there it could have mowed every one of us down. We were sitting ducks but the beach had done been taken at that time. We had to cross a flood wall. It was four to 12 feet tall. We crossed it was about 8 feet.

Utah Beach was cut into three beaches. We were supposed to land on Tarry Green and I don’t know where we landed. The captain said if you get lost; go to the IP, Initial Point. I don’t know where that initial point is to this day. But none of us got lost. We all stayed together.

The hedgerows were thick and the captain said we’ll dig in right here. So we did and that night the Germans tried to wipe us out. We had terrible air raids, every night. They hit some good licks. They would drop flares. The air would be full of them. They looked like they would last for 30 minutes, but they were only 10 minutes. We were taught; if they drop a flare, act like a fence post.

When I came back, I had problems, for a while and then finally it just went away. I’m a light sleeper. The boy I dug in with, he could sleep through anything, but I couldn’t. When I got back I met a young lady and we got married. Been married 65 years plus. Raised three children. I’ve got great grandchildren. 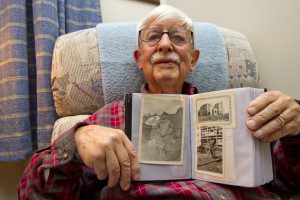 I was a senior at Sherman High School and I was president of the senior class when I was drafted in 1942. It was in November so I it was about halfway through the term.

We landed on Utah Beach. It was high tide on the beach so we couldn’t get in. We had to wait there in the open. German airplanes would come over at tree top level spraying bullets everywhere.

We went five and a half miles inland to Sainte-Mère-Église, France to this big field. The next day, we started setting up tents. We had 57 tents to set up the next day. That included the tents we lived in and for the patients. On the next day, we started getting patients. We were a Neo-Psychiatric unit. I never will forget one soldier come in and he was there, but that was it. He was dirty and disheveled. I was admitting patients at the time. He said I think I know you. I checked his dog tags and I did know him. He was from right across the river. The doctors determined whether they were ready to go back or not. He went back to the front, but then a few weeks later he was back and that was it for him. I asked about him but never did find out what happened to him after the war.

It was 24 hours a day. No such thing as an eight hour day. Everybody done it. It got so that even I knew what was going on with them. They were shell shocked. You could read it. We treated all of them.

Up on the hill was a little church. Out from it was a graveyard. One day, I went up there. What I saw was…military personnel soaked with oil where they had fished them out of the surf. I didn’t stay long. It was heartbreaking. That was the only time I went up there.

It was a little bit difficult when I got home. I had been places and seen things that a normal country boy would not be familiar with. When I got back, I enrolled in the senior class and graduated with them. It was a little bit difficult to do. I was older and I knew it. I’ve seen a lot of things I was grateful for, too. I do flash back sometimes. It is something I can’t get away from. A lot of it is in my head, yet.

It was quite a while that I couldn’t watch movies about the war. It upset me so that I couldn’t sleep. My wife would tell me “You’re not gonna watch that.” She was right. It would go through my mind all night long.

A young man, I felt like it was my duty to be there. I did the best I could. There were many things that I remembered later on.

The West Virginia Voices of War documentary includes the voices of 46 West Virginia war veterans with their thoughts on war, trying to stay alive and get home. It includes men and women who served from World War II through Afghanistan.