You are here: Home / Thriller Audiobooks

Prefer to listen to a book? We’ve got you covered! Download these thriller audiobooks and take an adventure with you, whatever you are doing. 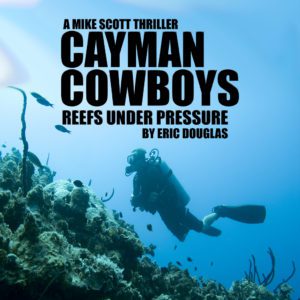 Diving in Grand Cayman, magazine photographer Mike Scott notices a series of unusual occurrences including the death of a girl, a protest of new development and the systematic destruction of coral reefs. It all comes together when armed men warn him away from a dive site. Investigating, he witnesses a specially-equipped submarine destroying the reef. Before he is able to report the destruction to the authorities, he and his dive buddy, Kelly, are kidnapped–along with Kelly’s girlfriend Tanya. Friends rescue Mike and Tanya, but the assassin gets away with Kelly, taking him to die. They must race against time to save Kelly and bring down the greedy developer putting his own wealth before the beauty of the island and the welfare of the people. 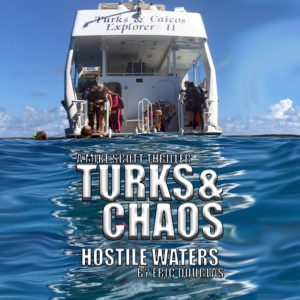 This story is set on board a trip on the Explorer Ventures Turks and Caicos Explorer. It also features many of the passengers who were on board during a trip in the fall of 2017, including several cast members from ScubaRadio. They voice their own characters in the story.

Get it on Audible!

Get it on Amazon!

Listen to a sample!

Hear Eric talking about the book on ScubaRadio. 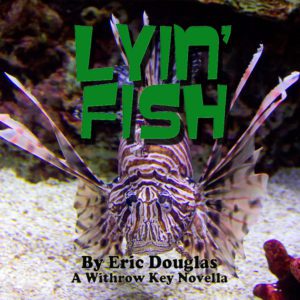 The crew from the nationally-syndicated talk radio show ScubaRadio comes to sleepy Withrow Key for a lionfish rodeo, but immediately Jackson Pauley feels something isn’t right. “Greg the Divemaster” Holt can barely dive. When Jackson spears a lionfish, Greg grabs it and gets stung. The radio show is a disaster. When Duffy, the local bar owner, goes missing Jackson, Littlebear and Zach jump into action to unravel the mystery and save their friend.

Lyin’ Fish is the ninth story from Withrow Key. Set on a bypassed key in the Florida Keys, life moves a little slower and a little weirder. Each Withrow Key thriller features scuba diving, adventure, boats, the ocean and mystery along with beautiful locations and scenery.

This audio book features the voices of some of the real characters from the show!

Listen to a sample of Lyin’ Fish!

Find out more about Lyin’ Fish. 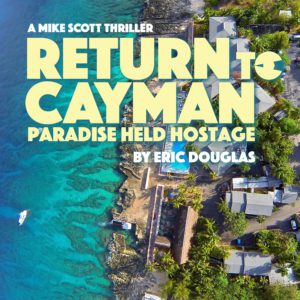 Somehow, it’s all connected. When all of the island’s communications are shut off from the world by an environmental terrorist, it is up to Mike Scott and his friends to put a stop to it. When they discover there is something else going on entirely, they realize the whole world is in danger.

Return to Cayman is a full-length novel and the sixth story in the Mike Scott series.

Listen to two audio samples from the story — including one you can’t find anywhere else.

Find out more about the book here.

A jet plane crashes in the waters off of the island nation of Curacao catapulting international news photographer Mike Scott on a chase to figure out who brought down the plane and why. More importantly, he has to save the life of the pilot he rescued from the water after the crash and his own life in the process.

Oil and Water weaves a story of international intrigue with oil cartels and mercenaries sent to disrupt their plans. Oil and Water is a novella and the seventh story in the Mike Scott thriller series.

Listen to a sample of the narration

Find out more about the book here. Or download it today and begin listening!

Don’t already use Audible for audiobooks? Follow any of the below links to begin a 30-day FREE trial of the service and start out by listening to:

Oil and Water: Crash in Curacao

Voiceover artist CJ Goodearl lent his talents to Oil and Water and Return to Cayman. Check him out at CJ Goodearl Voice Overs.