There are times when writing a book makes a writer lazy. When you have 80,000 to 100,000 words to tell a story, you can take your time. A bigger challenge is writing a story that has characters, plot and suspense in 1000, 500 or even 100 words. It becomes just as important what you leave out as what you put in. You leave it up to the readers to use their imagination to fill in the blanks and decide what happened.

The following flash fiction pieces were written for another project, but they never got used. Rather than rot in a metaphorical drawer, I’m sharing them here. Just because.

The first piece is a flash fiction detail from my novel Cayman Cowboys, set on Grand Cayman. The second is an original Flash Fiction piece. Both are 200 words. 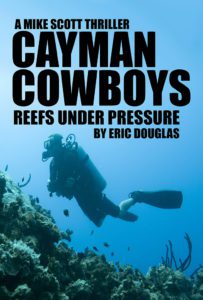 Groggy from the blow to his head, Kelly took stock of his surroundings. Waking up on the cold metal bench, he guessed he was in a chamber. He couldn’t see much through the portholes in the steel compartment, but he knew he was underwater. How did he get here? How was he going to get out?

Kelly didn’t know if anyone was coming for him so he decided to swim for the surface and pray he could make it. The diving bell’s air supply was off so he didn’t have a choice. He could suffocate where he was. He could drown in the water. Or, he could make it. He had one in three chances, but he had to give it a shot.

The sun was rising outside and he could see just a bit more through the portholes. The vague morning light didn’t tell him much. He could just make out the reef below him, but he could be in 20 feet of water or 90.

Kelly stilled himself, and did his best to slow his heart rate. He could tell the air in the bell was getting stale. It was time to go. He had nothing to lose. 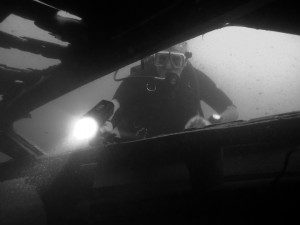 “Shipwrecks creep me out a little bit,” Rick said as he assembled his dive gear.

“It feels like someone’s watching me. I get the feeling that there are ghosts.”

“You don’t have anything to worry about,” Greg lied to his new dive buddy. They had just met and Greg didn’t want to miss the dive for some silly superstition. “This is an artificial reef. No one died on board. It was completely empty when it went down.”

Satisfied, Rick followed Greg to the swim step. Descending along the anchor chain to the bow of the wreck, Rick felt uneasy. The water was warm and visibility was good, but he felt a chill. He could clearly see the hole in the hull of the cargo ship in front of him. It had been torpedoed.

Rick was mad at Greg for lying, but he knew his new friend was right. There were no ghosts on board the ship. He was just being silly. He followed Greg through the pilot house and then they turned toward an interior corridor. Rick hesitated, but decided to stay with his buddy.

It was the last decision he would ever make. Neither body was ever recovered.