You are here: Home / Books / Five novels on Kindle for the Price of One

Saturday, February 7, Eric was on Scuba Radio with Greg Holt talking about the new 5 book boxed set. Listen to it here! 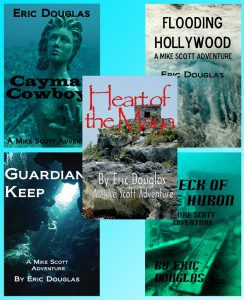 A new Mike Scott Adventures Boxed Set is now available on Kindle that includes all 5 Mike Scott adventure novels along with two short stories featuring Mike as well. In all, this is a $17 value, and would cost more than $50 in softcover, and you can get it all for just $9.99. Go to Amazon to download it right now!

Okay, not really, but that’s still a pretty cool deal. The digital age of publishing has changed everything about how books are priced and sold. What you used to pay for a single novel (or less) can now get you five complete books and a couple bonuses as well.

If you’ve ever thought about reading  the Mike Scott stories, but weren’t sure where to begin, here’s the solution. Download the boxed set and read them all.

Even better, the next Mike Scott story will be out June 1, 2015 and there are several cross references and tie-ins to the earlier books. Here is your chance to catch up on the earlier stories and catch all of the insider references.