You are here: Home / Diving / Harvesting divers still dying all over the world 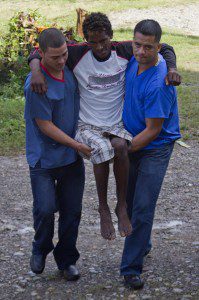 In spite of efforts from various organizations over the last several years, men (and yes, they are almost exclusively men) use scuba equipment to harvest lobster, conch and sea cucumbers among other things from the ocean floor. They do this with little regard for themselves or the environment, often overfishing the area. In the process, nearly all of them have injured their bodies so completely only a few of them are even fit to dive at all. They all have various levels of paralysis and nerve damage.

When I’ve written about this before, I’ve had people comment that the divers should just stop diving and do something else. Or, people have said, it isn’t our fault, we don’t make them dive.

In a sense, we do make them dive. We insist on cheap seafood so we can “all-you-can-eat” ourselves into obesity. As long as we are willing to buy these products, without insisting on sustainable sources for them, we are responsible. There is no difference between this and sweat shops or child labor being used to create the cheap goods we use and throw away when we are done with them. Yet, the moral outrage that is directed at sweatshop labor is nonexistent for harvesting divers.

Nearly two years ago, I traveled to Honduras for the fourth time (There were additional trips to Brazil and Mexico to meet with other groups of divers as well) to meet with and talk to Miskito Indians who dive for lobster; this time it was with a crew from the NBC show Rock Center. In January of 2012, they aired a two part segment (with additional online footage) called Lobster Trap. They used articles I had written on the subject as background material and I was interviewed on the show as well. I just learned yesterday that Lobster Trap won the 2013 RFK Book & Journalism Award for International Television. The segment’s producer Catherine Olian and the reporter Natalie Morales were specifically honored.

The RFK Journalism Awards recognize outstanding reporting on issues that reflect Robert Kennedy’s dedication to human rights and social justice, and his belief in the power of individual action. Winning entries provide insights into the causes, conditions, and remedies of human rights violations and injustice, and critical analyses of the movements that foster positive global change.

I am proud to have a small part in this story and hope that this award will continue to draw attention to the problem of harvesting divers throughout the world.

If you want to read more about this problem, view a short film I put together on three groups of harvesting divers, or watch the NBC show Lobster Trap, you can find the links on the For Cheap Lobster Page..