You are here: Home / Diving / Intro to Dive-abled: The Leo Morales Story

The following is the first page of the new book Dive-abled: The Leo Morales Story. Visit the book page to learn more about Leo, overcoming cancer and his motto that Nothing is Impossible! 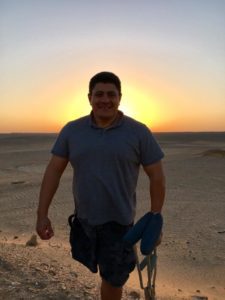 You will often hear people make broad statements without having faced true adversity. They’ve never wanted to end it all because of something that happened in their lives. They’ve never had to fight to walk again or felt like they were less of a person than they were before. And they never found joy, peace, inspiration and purpose in something.

But Leo Morales has.

By his own admission, Leo “had it all.” He was an up-and-coming young professional who had fun and made money. At twenty-eight years old, he became a bank director and won several awards for performance. His star rose fast and he enjoyed the ride.

He felt a strange pain in his lower back. He wrote it off to sitting at his desk as he worked long hours at the bank. Finally, he gave in and consulted a doctor. The news was shocking. He had cancer. The tumor was on the inside of his right leg and right buttock. It weighed three kilos (6.6 pounds). The doctors told him there was a serious risk the cancer could spread into his vital organs. The only solution? Remove his entire right leg. The odds were high he would not survive the surgery. If he did, the doctors said he would have a five-year life expectancy.