The fifth story in the Withrow Key series of short story adventures has two guest characters and sets the stage, in terms of character development, for the novel Wreck of the Huron.

Mike Scott, the hero of all four of my dive adventure novels is passing through Withrow Key and decides to drop in on his old friend Jackson Pauley. Everything is going fine until Sarah shows up. She is an environmentalist with a story that both men have trouble believing, but something about her convinces Mike to help her out and check out the story she is telling. From there, things really get interesting.

Without spoiling the story, Sarah shows up in Wreck of the Huron as a researcher on board a university research vessel with mysteries of its own. 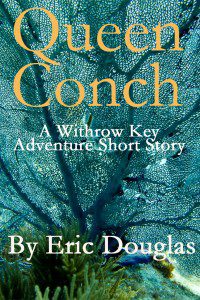 Queen Conch is a protected species in the United States, but smugglers are catching them close to Withrow Key for restaurants in Miami. In the process, they are tearing up the coral reefs and creating an environmental disaster. It is up to Jackson Pauley and Randy Littlebear to determine if this is simply an illegal fishing operation or if there is something bigger going on. Is someone making a land grab to build condos on Withrow Key?

This is the fifth Withrow Key adventure short story. Set on a bypassed key in the Florida Keys, life moves a little slower and a little weirder.

Each story in the Withrow Key adventure short story series features scuba diving, adventure, boats, the ocean and mystery along with beautiful locations and scenery. Jackson Pauley and Randy Littlebear get a visit from Mike Scott, international news photographer and the main character from the Mike Scott adventure series.

Queen Conch is available as a FREE Kindle download October 14 and 15. Get your copy today while the offer lasts!.