You are here: Home / Documentary / Russia, wrap up

It snowed on our last full day in Russia. It was actually fitting as we had decided to go traipse around the Moscow Kremlin that day and it seemed to make sense. The temperatures were warming up though, so it was a wet snow, much different than most of the time we spent in Moscow where the air was so cold it sucked the humidity out of the air. 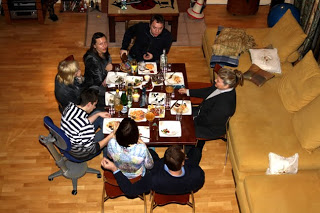 All in all, a good trip. From a purely professional perspective, it was great to share my Russia project (Russia, Coming of Age) with the Russian people. Many of the comments that I received talked about how my photographs helped them remember their recent past and realize just how much their lives had changed in the last 15 years. Every time I turn around in Moscow, it seems like something else is evolving right in front of my eyes.

From a personal perspective, I came away from this trip with a few new friends, explored some parts of the Moscow region I had never seen before, and revisited some I hadn’t seen since my first trip in 1993. While the purpose of my trip was to exhibit and share my work with the Russian people, I ended up learning as much, if not more, than they did. This trip just reinforced that there are no real differences between the Russian people and Americans.

Of course there are cultural differences. They speak differently, they act differently. But when it comes down to it, they face the same problems (money, jobs, school, homelife, family) that we all do. They aren’t better at it, or worse. They are just people. And on that level, we have a lot more in common than separates us.

If you want to see some photos from the exhibition at the House of Cinema, follow this link. http://dnevnikfest.3dn.ru/index/svjataja_anna_13_03_10/0-09 Its all in Russian, but scroll down to where it says “Открытие фотовыставки Эрика Дугласа” and those are photos from the exhibit. Also, the first minute or so of the second video on that page shows it as well.