You are here: Home / Documentary / School 11 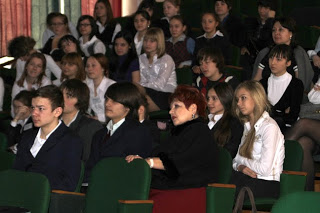 Korolev is also where I’ve spent a large part of my time in Russia. It is where our exchanges began in 1992/1993 and where they still happen today. Throughout my time here, one very special place is always involved. The very special School 11, a school that specializes in teaching English as part of their curriculum. While all Russian schools teach languages, this one pays extra special attention to teaching language and usually one other language as well—on top of the regular subjects like math, science, literature and whatever else.

This school’s focus on English, though, is why we have spent a lot of our time there, and why I have spent much of my time there. Many of the translators we used in the beginning were English teachers from the school, many of the students who’s English skills were judged good enough to come and study in America were from that school and in the fall of 1994, I spent 3 months working with English classes in that school—I was accepted as a teacher, although my only qualification was that I spoke English and could converse with the students helping them to practice.

What that time in the school also gave me was tremendous access. I was able to photograph students while they studied, and eventually they forgot about me. Many of the photographs from that period make up my current “Russia, Coming of Age” project. When I returned to Russia in 2008 to follow up on my earlier photographs, I returned to the school and again got many great images of students which are also featured in the new exhibit.

So, it was natural that on this trip, one of the places I would stop was School 11. This time, though, I showed them my work and let them talk about it. I showed the students a video made up a still images and quotations from people I’ve met over the years. While most of the kids in the room weren’t even born when the earlier photographs were taken, I think many of them were intrigued with what I had captured. And, of course, a couple of the students I photographed in 2008 ended up being in the room this time around, warranting some giggles from the students.

The reason I believe they were interested in what I was showing them was I had been warned not to expect too many questions from there, so I was instructed to talk and fill up the entire hour I was allotted. But, stubbornly, I opened up the floor to questions anyway. They were a little shy at first, but then the questions came and then came and they came. Before I knew it, we were running over our time.

Ultimately, that generation will need to know what has passed on before them, of course, but they will also be the ones to move beyond their past and build anew without the past hanging over their heads. They are the ones to watch.

Heading home in the morning. As always a long, long flight. More when I get back to wrap it all up..