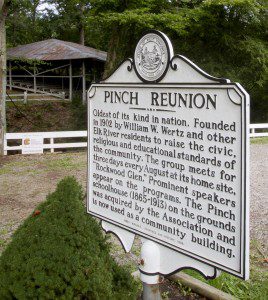 I’ve lived in California and North Carolina and traveled to six of the seven continents on this globe. I’ve seen enormous cities and I’ve seen small towns. Now that I’m back in West Virginia, I’ve found myself in Pinch, a tiny community north and east of Charleston. And I like it.

This weekend is the Pinch Reunion. The reunion is the “longest running community reunion” in the nation. It has been going on continuously since 1902. According to the website, the Pinch Reunion began to “raise the educational, religious, and family standards of the community of Pinch.”

Pinch today reminds me of Cross Lanes when I was a child in the 70s. Back then, everyone knew everyone else and that was a good thing. In the evenings, especially in the summer, everyone would be outside working in the yard, or relaxing and playing games. My dad built us a badminton court in the backyard and kids came from all over the neighborhood to play. We also had a chilled water fountain in our basement that my dad drug in from somewhere. When it was hot outside and everyone was sweaty from playing, there was nothing better than the water coming out of that fountain.

Growing up, we didn’t have a lot of extra money, but we camped at state parks and went to a lot of local festivals to hear music while my parents square danced. Those of are some of my best childhood memories.

In general, it seems like we are all busier and probably aren’t quite as social as we used to be back during my childhood. I hear kids out in my neighborhood playing, but it is just the younger ones. The older kids have too many things to do or they are busy with their phones and other electronic devices.

And that is where the Pinch Reunion comes in…for me anyway. I’m not from this area, so it isn’t like I’m going to see anyone I know there, but for me the reunion is a chance to hear some good local music in a really fun location (the “wigwam” on the Reunion Grounds is one of the coolest venues I’ve ever seen) and maybe reconnect with my own past and childhood. I’ll probably drag my girls along, too, so they can get a taste of what I’m talking about…if I can get them to put their phones down.

I’ll be there. Will you?

You can find the Pinch Reunion Schedule at: http://pinchreunion.webs.com/.