You are here: Home / Documentary / The exhibit 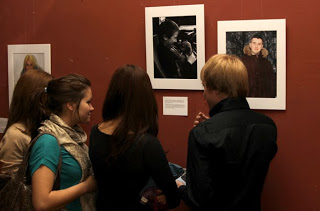 It was extremely gratifying to see the heads begin to nod in understanding as I explained the reasons for my photography documentary project on the people of Russia. They seemed to understand that their own lives had been changing very quickly and maybe it was easier for someone who wasn’t intimately involved to make objective observations.

Due to traffic and a little time confusion, we got to the exhibit hall just as the opening for my exhibit was about to start, but we had called ahead and the event organizers were very flexible so it was not a problem. Within a few minutes of walking in the door, though, I was being interviewed by a crew with a video camera—with my favorite translator Nadia by my side. No idea who they worked for.

In the exhibit hall, they had set up the display running along a long wall, about 100 feet long with the photographs in pairs. It looked really nice. At one end, we had a table set up with chairs and a microphone. One of the event organizers introduced us and explained the program and then allowed me to speak to the crowd of 50-75 people for a few minutes before people wandered off to look at photographs or attend the next film screening. The hall where the photos are is the “event” room. Last night there was a musical concert there and it is also a café for the House of Cinema. So, there will be good foot traffic all week.

After we left, Vadim asked me if it was worth it to come all the way to Russia to have an opening of my photographs that lasted about an hour. From a purely practical standpoint, its not obviously. The expense of being here is not being offset by anything. I’m not selling the photographs, I’m not selling my books. This is all about the experience. As a writer, photographer and storyteller, it is all about the story. I can take all the photographs I want to take, but if I don’t show them to people—if I don’t tell a story with them—then they are more useless than if I had never taken the photos in the first place.

It’s fun and exciting to the “center of attention” for a minute, but the best part is to see the smiles on the faces of the people as they look at the photographs and remember the changes in their own lives over the last 15 years..