You are here: Home / New Releases / Time to put an end to cancer!

Twenty five years ago today Michael Scott Burnsworth died from cancer. I can honestly say, that single event has shaped my life and career in more ways than I understand—even now. The hero of my adventure novels is based on him, using his name and physical description. In Keep on, Keepin’ on with Jean Hanna Davis about her struggles with breast cancer, I wrote about Mike in the introduction.

Last week was the one-year anniversary of the death of another of my high school classmates Teresa Holovic O’Connor from cancer. She fought a long, hard fight and her family and young daughter are still struggling with her loss.

Below you will find my introduction to Keep on, Keepin’ on. Mike didn’t die from breast cancer, although men are touched by the disease as well. For me, cancer is cancer and we need to find ways to end it all so young men can live their lives and fulfill their potential and mothers won’t leave behind grieving children.

May 3, one of my daughters will be walking with me to support breast cancer research. Won’t you join us?. A dollar from the sale of each book through Saturday will be donated to the WV Affiliate of the Susan G. Komen Foundation. You can still register for the walk, too.

Introduction to the book Keep on, Keepin’ on

I’ve written about cancer a few times over the years. When I do, most of the time I write about my friend Mike.

One of my dearest friends lost his battle with cancer in April 1989. Mike Burnsworth was only 22 when he died. I still remember Kay Taylor telling me he was sick for the first time a few years before. I was at Marshall and she drove to Huntington to tell me and her daughter Sandy about it. She knew it was something we needed to hear in person. 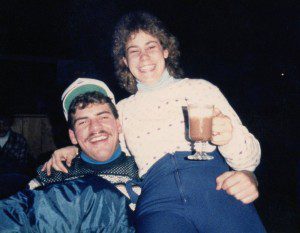 A few years later, I got the idea that I would interview cancer survivors to talk about their experiences for a book. I thought in a way it would be cathartic for me to talk to people who had been through cancer—a way to help me understand my feelings about Mike. Honestly, I failed to get the project off the ground. I didn’t know how to put something like that together.

I’m always amazed by the strength of people who have been diagnosed with cancer. So many of us complain and whine (myself included) about things that have little or no consequence. These are often referred to as first-world problems. And then I run across someone who isn’t whining. Or complaining. Just fighting. Like Jean Hanna Davis.

I would guess Jean would say that when you don’t have a choice, it makes you tough and you fight. The alternative isn’t an alternative at all. When your family and friends depend on you and you have lots of life left to live, you fight. It is the medical equivalent of being backed into a corner. Fight or Flight kicks in and since you can’t flee the disease, you fight.

Jean was first diagnosed with breast cancer while pregnant with her younger daughter. She had the awful choice to make of taking chemotherapy during pregnancy. She really didn’t know what it would do to Juliana, but she went through it anyway. I cannot imagine what that was like. Pregnancy is hard enough on its own, but flooding your body with drugs that nearly kill you in the process would simply be too much. But she did it. And survived it. And Juliana turned out just fine.

I first met Jean in high school at All County Choir. I don’t really know how we started talking. I ended up going out with a friend of hers a couple times. Later, after college, Jean was singing and playing music around Charleston and I would go hear her. I still love to hear her play Girls with Guitars.

She married Joe Davis and moved away and then I married and moved away and we lost touch for a number of years. Just a couple years ago, we reconnected and I have been awed to hear her story. I was gone during the first round of cancer.

Jean Hanna Davis is a wife, a daughter, a mother, a musician and a teacher. She is also a cancer survivor and a cancer patient.

Nearly 10 years later, the cancer is back. Over the regular beeping of the device hanging beside her bed, she takes a series of chemicals designed to kill the cancer. In the process, it tears her body down; something familiar to every cancer patient and every person who has had a family member go through cancer treatment. The chemicals are administered one at a time. Not unusual for cancer patients, she knows the formulaic name for each of her medications and what they do. She knows which drugs will upset her stomach, make her nauseous and all the other side effects that come with letting toxic chemicals into your body. (The nurses and technicians have to use special gloves so they don’t get chemicals on their hands and get burned.)

In today’s world, journalism is often about sound bites and telling stories as quickly as possible. It is much rarer to get the opportunity to tell complete stories. In early August, Jean offered me tremendous access to a period in her life when most people would insist on privacy. In the spring she was diagnosed with cancer for the second time. After a second mastectomy and radiation, she began chemotherapy, a month shy of 10 years after the first time.

I sat with her through four of her six chemo sessions and we got together for another couple long interviews. Jean is a fighter. She is not about to take this lying down. Most of her friends refer to her as Wonder Woman for her attitude when it comes to cancer. She wants to talk about cancer because she hopes her experiences will help someone going through cancer for the first time will learn from what she has been through.

What follows are interviews, stories, Facebook posts (to begin each chapter), essays written by Jean and private thoughts recorded into an audio recorder in the evenings or on the way to her chemo appointments. There is some repetition of thought as she writes about something in a personal note, or talks about it in her own personal recording after we talked about it in an interview or chemo session. I left them in there, because I feel like it gives you a better sense for what is on her mind and what she is going through.

While Jean is an upbeat and optimistic person, it isn’t all sunshine and roses. But it is a real look at the process. I think this book will be valuable for friends and family of people handling cancer and for cancer patients themselves. I hope everyone who reads it is as inspired by Jean as I am.