You are here: Home / Uncategorized / Tomorrow is Earth Day

Earth Day means a lot of different things to a lot of different people. I won’t even get into the political ramifications of it. Frankly, I’ve never understood how politics even comes into play when it comes to taking care of our natural resources and the world around us.  I understand how people can disagree on the method, but appreciating the world around us isn’t that hard.

About 20 years ago, I was working as a reporter on the Metro Staff at Charleston Newspapers. It was an election year and Earth Day (then as now) was a few weeks before the Primary Election. A politician organized an Earth Day event where he was giving away tree seedlings. I ended up taking one and planting it. Today, it stands tall in my mom’s backyard. (It’s probably cynical to observe that the politician didn’t organize another event the next year when he was safely elected to office.) A couple weeks ago, my daughters were given two tree seedlings at the Easter Carnival at the WV State Capitol. There are plenty of trees in West Virginia, but it can’t hurt to plant a couple more. 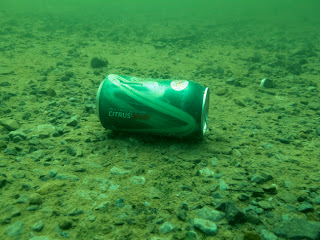 Don’t get me wrong, I’m not holding myself up as a paragon of Earth Day virtue. I’d just like to see things clean and clear for my daughters. As a diver, I’ve had the good fortune of traveling to different locations around the world to dive. It makes me sad to see trash underwater and it seems to show up everywhere. Even in Summersville Lake, where I learned to dive, people throw trash overboard from their boats. “Out of sight, out of mind” I guess.

You don’t have to be a “tree-hugger” or even (gasp) an “environmentalist” to want to protect the planet we live on. Hunters are some of the best naturalists and conservationists. They want to keep areas natural and clean so they can continue to hunt. It’s also something they do to share their love of nature with their families. It’s a huge generalization, I know, but very few avid hunters would describe themselves as “environmentalists” as if that word were distasteful. Many of the hunters I know would describe themselves as “conservative”.

Ultimately, if we want the earth to be in good shape for our children and their children, we have to take steps to care for it today. It isn’t a matter of “Left” or “Right” or Conservative or Liberal. We all share this planet and have to find ways to work together to protect it. Earth Day is a simple reminder to do that. But it shouldn’t be limited to one day a year. It takes changing a mind-set that littering is acceptable or that “some” chemicals in our water supply is OK.

In the old testament, Psalms, it says:
“You [God] made humans ruler over the works of your hands; you put everything under our feet: All flocks and herds, and the beasts of the field, the birds of the air, and the fish of the sea, all that swim the paths of the seas,” Ps 8:6-8.

That doesn’t mean because it’s ours, we can simply tear it up and use it however we want. We have an obligation to care for it and protect it. It’s fitting that Earth Day this year falls on Sunday. No doubt there will be many sermons offered tomorrow on Good Stewardship of the earth. It can be as simple as picking up trash you see on the street. Or recycling. Or planting a tree. Every little bit helps, and better yet every positive effort isn’t a negative one. By changing the way we act and think, we can improve our lives and the lives of the people who inherit this world from us.