You are here: Home / Diving / Working With NBC

A little more than a year ago, NationalGeographic.com profiled the problems with the lobster divers in Honduras; they used several of my photographs and quoted Dr. Matias Nochetto from DAN and I about the issue as we were both working on the Harvesting Diver Project.

In September of this year, I was contacted by a reporter from the New York Times who was headed to Honduras on a different story but remembered the NatGeo piece and wanted to do a follow up. That story ran in September (almost a year to the day to after NatGeo).
Just after the NYT story ran, a producer from NBC contacted me to get more background information. Over the next couple weeks I spent approximately 6 hours on the phone with them, talking about logistics and helping them understand the diving situation and terminology. They finally invited me to join their news crew for a few days when they went to Honduras.
And that is how I came to be standing at the airport in San Pedro Sula, Honduras on a Sunday afternoon surrounded by security, a dozen people and more than 35 cases and pieces of luggage. The camera guys had 23 cases of their own just for equipment. I knew this was going to be a completely different trip than any other trip I had made to Honduras…or anywhere for that matter.
Natalie Morales from the Today Show was the correspondent for the story. She is an extremely down-to-earth person and didn’t really want any special considerations. The network was nervous about her being there so they had hired security personnel for the crew and one man, Frank, was her personal security.
After getting all the equipment and crew packed into five cars, which took a while, we headed out for the two-and-a-half hour drive from San Pedro Sula to La Ceiba where Dr. Elmer Mejia operates a hyperbaric chamber. I’ve written about him several times in this blog previously.
During the drive Dr. Mejia was on the phone with a boat owner. We learned that injured divers were on the way to the chamber. First it was 3, then 4 and finally 5 divers were going to arrive at the clinic. Since the story was developing so quickly, the crew decided to go straight to the dock to pick them up. By the time we got there it was pouring the rain and dark, but the camera guys went down to the docks with Dr. Mejia and got them. The rest of stayed outside as the port security was edgy about too many of us going inside. 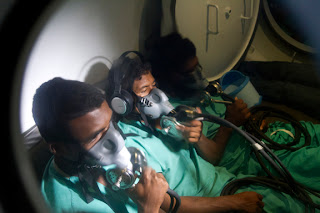 With so many injured divers at one time, Dr. Mejia had to put two divers in the outer lock and compress the entire chamber at one time. This is not safe, as there is no way to lock someone in or out of the chamber if there was a problem, but Dr. Mejia felt he didn’t have a choice. After examining each of the divers, four had relatively minor problems, but one had more severe injuries. He began a US Navy Treatment Table 6 at 7 pm. The treatment would not end until nearly midnight.
Day 1 has a happy ending, though, as after a shorter treatment on Monday morning each of the divers was released to go back home. Whether it was the quick treatment or luck, we will never know. Unfortunately, many of the divers don’t have that sort of luck when it comes to dealing with paralysis caused by decompression sickness.

Before the group of five divers left the clinic, Dr. Mejia fed them lunch and got them cleaned up. And then Thelma Sakeyama came to the clinic. She is a special evangelical pastor to the people of La Moskitia. She sang and preached for them and they seemed to appreciate it. Before they left, she took down all of their names.
The next couple posts will detail my experiences with NBC in Honduras to help them tell this story. They asked me at the time not to publish these stories until their story was ready to air. The trip began on a Sunday and I flew home on Thursday afternoon.
For anyone who watched the story last night on NBC’s Rock Center and are interested in contributing to help Dr. Mejia, you can do so here.
Watch the story online from Rock Center now.
Find out more on my website.

Tomorrow, I will post about our first full day on the ground in San Pedro Sula. Stay tuned..