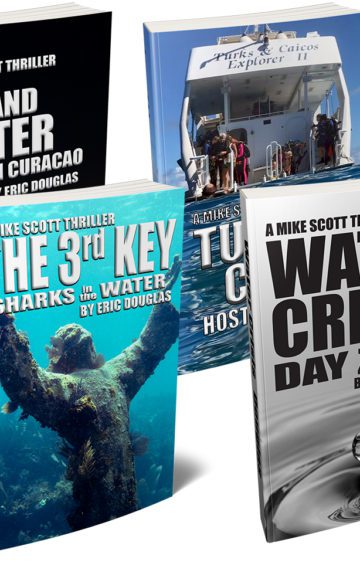 Sun, sand, scuba diving, adventure and intrigue are all part of international photojournalist Mike Scott’s life. And he finds adventure all around the world.

Oil and Water: Crash in Curacao

A jet plane crashes in the waters off of the island nation of Curacao catapulting international news photographer Mike Scott on a chase to figure out who brought down the plane and why. More importantly, he has to save the life of the pilot he rescued from the water after the crash and his own life in the process.

Oil and Water weaves a story of international intrigue with oil cartels and mercenaries sent to disrupt their plans.

The 3rd Key: Sharks in the Water

Sharks are attacking divers in the Florida Keys. Mike Scott barely survives the first incident. But it doesn’t make sense. These sharks are especially aggressive, attacking in groups and not retreating. It’s almost like someone is controlling them.

The discovery that a narco sub full of drugs sank nearby may be the reason, but that doesn’t explain why all the activity is focused around the Christ of the Abyss statue in Key Largo. Is there something else going on? Is it the statue itself? Or is there a larger conspiracy? It’s up to Mike to unravel the mystery before anyone else gets hurt. Or killed.

Looking for a box set of books 1-3 of the Mike Scott thriller series?

Looking for a box set of books 4-6 of the Mike Scott thriller series?