The following is an excerpt from the Mike Scott thriller Heart of the Maya. 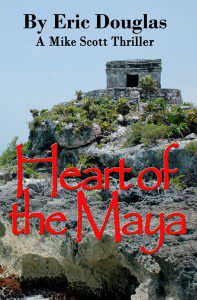 Hector stopped his truck 100 yards away from the entrance, pulling it off the rocky, bumpy road into a space between some trees. They would walk the rest of the way in. The walk from the smaller cenote opening to the larger one was another two hundred yards above ground although the terrain was going to be rough. The local Mayan community kept the location of the smaller entrance secret and there was no path between the two. Still, it couldn’t be helped. They didn’t want to tip off Montero that Grandfather was there before they were ready. Hector and Grandfather knew the area, though, so Mike simply followed along. He didn’t know if Grandfather had some special otherworldly guidance or had visions like he had at the hotel when he agreed to bring Mike and Hector along. But he hoped the man was getting help from above right at the moment so none of them twisted an ankle or broke a leg and failed to even get close to Montero and his followers. They had to save Alivia.

Mike wasn’t sure what role the twins were supposed to play. He didn’t know if they were actually in danger, or whether they were just to there for the ceremony. Regardless, he didn’t want to two 12-year-olds to be involved in a murder just because they were born twins and could fulfill a legend in the twisted mind of a Mexican drug dealer.

The sky continued to lighten as the threesome crept through the woods. They began to hear noise ahead of them. Montero was making no secret about what was going on. He had invited all of his followers to witness the sacrifice. When Mike got close enough to see the edge of the cenote, his jaw dropped. He saw more than 100 Mayans gathered around the upper edge. When Mike and Hector entered the water the day before, they had done so through a series of steps built into the lower side of the opening where the limestone had collapsed over the years.

Montero had staked out the higher side of the cenote like a stage. He wanted to be the center of attention and make sure everyone could see him.

The drug dealer turned wanna-be Mayan leader and resurrectionist stood quietly at the top of the hill. He was wrapped in a robe covered in traditional designs and colors portraying ancient gods and symbols of leaders from long past. Grandfather snorted when he saw the younger man.

“A shawl we make for tourists,” was all he said.

Montero spoke to his followers to get their attention and Mike immediately knew he was going to have a problem. Montero was speaking in Mayan. His grasp on Spanish wasn’t very strong, but Mayan was completely alien to him. There was no way Hector would be able to translate for him to keep him up to speed with what was going on either. He wasn’t going to be much help here.

“My friends, the time has come. Everyone come together! The time has come to begin the Fourth Age of the Mayan people and to reclaim our lost glory,” Montero said, his face exultant at the situation as if he truly believed he was about to receive blessing from the gods.

Mike stared for a moment, trying to decide what to do. His eyes searched the crowd and the cenote for some way to help. Grandfather was right about the armed men. Throughout the crowd, Mike could see Montero’s soldiers armed with handguns and submachine guns, rifles and shotguns. They were spread out among the common people. Mike guessed they were there to encourage people to be supportive and cheer or pray at the appropriate times as well as to keep anyone from protesting what was going on. It was a good strategy, but it told Mike that not everyone there in the audience was a die-hard participant. That was a good thing.

Mike made eye contact with Hector and Grandfather and he realized they had come to the same conclusion. They hadn’t planned out how they were going to stop the sacrifice. At least Mike and Hector didn’t know what Grandfather planned or saw in his vision. He wasn’t sharing. The realization that some of the people in the audience might be swayed to see reason and not follow Montero was what the old mystic needed to see to make his decision. Mike saw that in Grandfather’s eyes.

“Tell me about the sacrifice,” Mike whispered. “Will they cut her before they throw her in the cenote? Or just throw her in to drown?”

Grandfather was quiet for a moment, considering his answer.

“The legend says that when Red Bird was sacrificed in the cenote, he was thrown into the water without being cut or having his blood let out. I believe Montero will attempt to duplicate that same ceremony here today. He wants to make a strong connection to the legend of Red Bird and the statue of Two Wolves before he shows them that he possesses the statue. I believe he will attempt to drown her in the holy waters by throwing her in from above.”

Mike considered the drop and the fall. And then he thought about the armed men and the crowd above and made his decision. He wasn’t going to be much use to Grandfather and Hector in dealing with Montero, but he had an idea how he could save Alivia. He hoped he wouldn’t be needed, but it was better than sitting here and doing nothing.

As quickly as he could he explained his plans to Hector and Grandfather.

“It is as I have seen, Michael,” Grandfather said. “Everything is becoming clear.”

As quietly as he could, Mike turned and began moving back toward Hector’s truck leaving the two men to face Montero alone. As soon as he felt safe, Mike stood up and began running toward the truck. He knew he didn’t have much time to save Alivia.

Get your copy of Heart of the Maya today, in softcover or Kindle. It is also part of the Mike Scott Boxed Set that includes the first five novels and two short stories.