You are here: Home / Books / Making stuff up 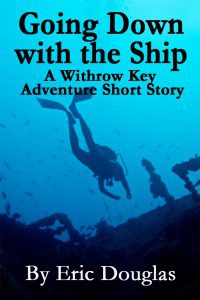 One of the coolest things about being a fiction writer is that you can make up things you need to tell a story. Obviously, writers make up people all the time…or risk getting sued.

I’ve read books where writers have made up planets or technology. The key to making up things like that is even if you make up something totally different, it still has to have a basis in fact. Sci-Fi writers look at what’s available today and then extrapolate what might be available in the future. It’s always interesting to read some of the best science fiction from 50 years ago and then see how close they were to the truth. Still no flying cars, but we do have “communicators” that plug wirelessly into our ears that respond to voice commands.
I don’t write sci-fi, and all of my novels have been based on real locations I’ve visited (except for Cuba; still working on that trip) so you might think I don’t end up making up too much stuff. And that is where you would be wrong.
A few years ago, I decided to write a series of short stories. I knew I wanted to write about the ocean and diving, but I decided to do something different from what I had been doing. In my mind’s eye, I could see these short stories like a television series with a cast of characters in the same location. There would be some reoccurring characters along with new ones who came in and out as the stories evolved.
My first question was where? Where could I set this up that seemed believable? What location could have divergent story lines and themes? And then it hit me. I could make up my own island. From that, Withrow Key was born.
I decided to stay in the United States rather than going off-shore. If you’ve ever been to the Florida Keys, you know there are a lot of interesting characters there already. It didn’t seem like much of a stretch that I could have my own island with odd things happening on a regular basis. The first Withrow Key story was Going Down with the Ship. At the time, I knew some people involved in creating artificial reefs out of retired warships. Within months of each other, attempts to sink two ships got a little crazy as one ship sank ahead of schedule and the other rolled over on the surface, but didn’t sink until people had to board it again and cut more holes to let the air out. All of that came together in my mind to serve as the basis for that short story. It might not be science fiction, but I would definitely say it was a case of extrapolation from current events and wondering “what if?”
You can read an entire series of these short stories for free from my website. These stories are free to download, read and share. Just don’t change them or plagiarize them.
The most recent Withrow Key short story is available through Amazon. It is called Sea Monster.