You are here: Home / Photography / One-room schoolhouse – history just down the road 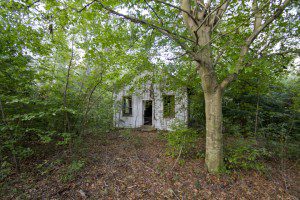 Just about a mile or so from where I live, adjacent to the Pinch Reunion grounds and back in the woods, is an old one-room school house. My wife showed it to me about six months ago, but I didn’t have a chance to explore it until now. 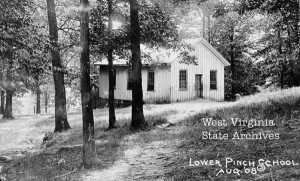 After a little checking around, I’ve discovered it was once called the Lower Pinch School. Maps show there was also once an Upper Pinch School a few miles away. I’m not sure if it’s still standing or not. Incidentally, online maps also show that the building is across the main road. It’s not. I was just there. I wondered if it had been moved, but I was able to find one old picture of it and it appears to be the same building in the same place. 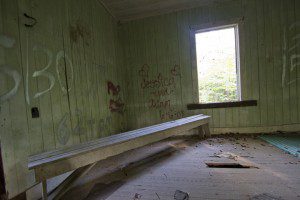 Walking into the school, I couldn’t help but think about the kids who studied there. What did they grow up to do or become? I’d wager quite a few of them stayed close to home, worked on the family farm, at the saw mill or in the mines. Some probably went away to fight in WWI or WWII, leaving West Virginia for the first time in their lives to fight and die in Europe, a place they vaguely studied back in that tiny school.
I’m sure the building is more than 100 years old, but it still appears to be sturdy. Walking as slowly and as gently as I could, I walked around inside—making sure to stay on top of the rough cut floor beams as I moved. I didn’t feel any give or bounce in the floor. The interior was dry as well, telling me the roof was solid. In spite of its age, the building was wired for electricity, so I would also guess it remained in use into the 1930s or 1940s, if not later. 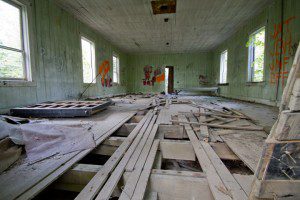 Vandals have torn up some of the flooring and painted graffiti on the walls. That’s normal and not at all surprising. There are pieces of an old upright piano in the building as well.
I’m curious who owns the building, or at least owns the land it sits on. I’ve never been opposed to development and progress. Believe me, the last thing I think we should do is go back to one-room schools. At the same time, I hate it when we forget the way things used to be and how far we’ve come.  I’d love to see someone take ownership of the building and restore it. It could be a community center or a local museum. Otherwise it’ll be a place for kids to hang out away from parents’ prying eyes—until someone gets hurt or it burns down mysteriously. 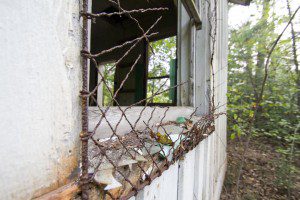 Time to do a little more digging.