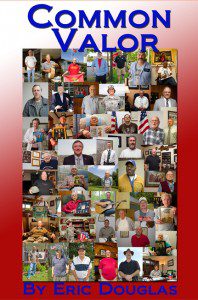 Tomorrow, I’m giving a workshop at the WV Culture Center Archives and History Library on collecting oral histories. I was asked to put on the presentation following the completion of the West Virginia Voices of War documentary project and donation of the original recordings to the archives.

When I began the documentary project, my goal wasn’t to create a documentary. I knew I would do something with the material, but my purpose was to capture veteran’s memories in war. Just a few months before I began the project, my daughter’s great-grandfather passed away, taking his memories of the bombing of Pearl Harbor and the subsequent war in the Pacific with him. It was too late to record him, but I wanted to do what I could to record other’s memories.

As part of the workshop, I’ll be showing selected portions of the West Virginia Voices of War documentary, but I will also be talking the tools you need to record oral histories and discussing some interview techniques.

For years, you needed quality tape recorders and microphones to capture oral histories and needed experience editing sound recordings and controlling audio levels. Today, most of those concerns are gone. You can make high quality recordings with a $200 digital audio recorder or even a free app on your smart phone. There are online sites that can help you edit your recording or upload it for others to hear and to keep it safe. The only thing standing in the way of collecting oral histories today is time.

When conducting interviews, remember to relax. As a newspaper reporter turned freelance writer, I’ve conducted 100s of interviews and I still make mistakes. One time, the battery in the lapel microphone died just after I began the interview and I got nothing. I had to call the gentleman back, head hung low, and ask if I could come back. I got a good interview the second time, but it probably wasn’t as good as the first one. Other times I interrupted trains of thought or laughed, messing up the recording of a great story.

I’m not currently conducting veteran interviews, I’ve moved on to other projects, but I would love to see an army of people with recorders out collecting oral histories of veterans and from families and neighborhood and community leaders. The worst thing that can happen is if we put it off and never get around to capturing anything. When those people are gone, so are the memories of what happened.

Eric Douglas will present “West Virginia Voices of War: Oral Histories from West Virginia War Veterans” in the Archives and History Library in the Culture Center in Charleston. The program will begin at 6:00 p.m. and is free and open to the public.

You can listen to the broadcast premiere of the West Virginia Voices of War documentary on New Appalachian Radio at 2 and 8 pm.

You can watch the documentary at the South Charleston Public Library at 7 pm..