The following is an excerpt from the Mike Scott thriller Return to Cayman: Paradise Held Hostage. 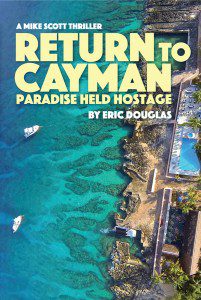 Mike stared upward in horror as the cruise ship’s anchor and chain began crashing into water. They were directly beneath it. He looked around at Kelly and saw his friend gesture frantically for him to follow and then Kelly began swimming as hard as he could. Mike took off. He doubted he could outrun the falling steel, but he wasn’t one to give up either.

A roaring sound filled Mike’s ears. He glanced backward without meaning to, his body reacting to the sound. When he looked back Kelly was gone.

Mike began swimming again as hard as he could, racing against the inevitable.

Where did Kelly go?

And then he saw bubbles coming from an opening in the reef below him. Back into the coral swim-through. The skylight opening was just big enough, but it was going to be close. Mike pushed his camera ahead of him and tried to make himself as streamlined as possible as he dove for the opening. He felt the gloom surround him as he made a final push forward, the adrenaline rushing through his body urging him forward.

And then it hit. The massive anchor chain dropped onto the coral with the force of a bomb blast. The water transmitted the energy of the anchor’s collision with the reef. Mike tumbled in the water as everything grew suddenly dark. He was turned upside down and slammed against the jagged coral. Debris fell all around him. His mask was knocked from his face and he lost his regulator.

Mike was in trouble.

“Island Paradise! You just dropped anchor on my divers and a reef. What are you doing?” Tanya screamed into the VHF radio microphone. “Are you insane? I’ve got people in the water!”

The force of the anchor chain hitting the water rocked the small dive boat, throwing Tanya, Captain Biko and the team of divers that had made it on board to the deck. As soon as she climbed back to her feet, she was back on the radio. She switched the radio to Channel 16, the emergency channel.

“All vessels, all vessels. MayDay, MayDay MayDay! We have an emergency. The cruise ship Island Paradise just dropped anchor on divers in the water. I need help. Six divers are missing. There may be injuries. Please respond!”

“Miss Tanya, the divers are surfacing. I’ve got two buddy teams on the surface,” Biko called out. He was pointing to the two groups of divers and scanning the surface for the third team.

“Who is it? Doesn’t matter. Get them on board. And keep an eye out for the last group,” Tanya said as she raced for the boat’s stern, to help the divers on board. She quickly realized who was on the surface. It was her two teams of science divers. Her people were safe. But that left Kelly and Mike still down there.

“I need help!” one diver called out while he towed his partner to the boat. “Kim’s unconscious!”

Without hesitation, Tanya grabbed a rescue float and dove into the water headfirst. She was there in mere moments and grabbed the stricken diver. With the strong kicks of an experienced swimmer she began towing the young woman to the boat, letting the other diver care for himself. As she swam, she checked the diver’s breathing and shouted at her to see if she was able to respond at all.

“Kim, Kim! Are you still with me? Come on, Kim, wake up!” she yelled to the girl, just inches from her face.

As they reached the swim step of the boat, Kim began to stir. Tanya handed the girl off to the boat captain and the other divers on board and began helping the diver’s buddy out of his gear.

“Phil, what happened?” she asked.

“We heard the recall alarm and started heading back. And then we heard the anchor falling. It was like a wall of water knocked us over and slammed us against the reef. I didn’t realize Kim was out until I started to swim for the surface and she didn’t follow. I grabbed her and brought her up.”

“You did good, Phil. You probably saved her life,” Tanya said, treading water at the back of the boat. “Did you see Kelly? Or Mike?”

“Not at all. No idea where they went.”

“Give me your mask,” Tanya ordered the young man. “I’m going to see if I can find them.”

Knowing the others on board would take care of the injured diver and bring everyone on board, she had time to think about her husband and friend.

Tanya hadn’t paused to put on fins so she couldn’t swim down very far, but fear and worry allowed her to swim down 10 feet to look around. Visibility was bad as the anchor and chain kicked up sand, tore coral loose, and threw everything every which way. She surfaced quickly.

“Any sign of them?” Tanya called out to the divers on the boat.

The first dive boat to respond to Tanya’s Mayday call over the radio slowed as it approached the scene. The boat and crew was from Off The Wall Divers, a different dive shop from the one she and Kelly owned. In an emergency none of that mattered. All the divers on the island knew each other and most had worked together at one time or another. If not, they had partied together. They were a community and were there to help each other out if one was in trouble. That was what it meant to be a Cayman cowboy. They looked out for each other.

Get your copy of Return to Cayman: Paradise Held Hostage today, in softcover or Kindle. It is also part of the Mike Scott Boxed Set that includes the first five novels and two short stories.