You are here: Home / Adventure / Sunday Gazette-Mail: Review of Return to Cayman 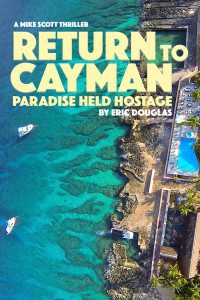 WV Book Team Review: Diver challenges a war on coral in the Caymans

CHARLESTON, W.Va. — “Return to Cayman” is the sixth in a series of novels Eric Douglas calls the Mike Scott Adventures.

In each book, Mike Scott is a photojournalist and diver who gets himself involved in some serious crime-fighting. In the latest novel, the plot involves a crime that has global repercussions riding on a “red herring” — that is, it seems what’s at stake are the coral reefs around the Grand Cayman Islands and being able to save them, but in fact the possible damage is much more far-reaching than anyone dreamed.

The story begins with the arrival of Mike Scott to visit old friends Kelly and Tanya, residents of Grand Cayman, an island with a population of 56,000. Kelly and Tanya own a dive resort, Sunset House, but Tanya is also working with the Department of the Environment to protect and restore the coral reefs surrounding the island, which are crucial to the diving industry.

A coral reef represents hundreds of years of growth of tiny, living sea creatures that form hard (mostly) outcroppings on the bottoms of oceans, especially around islands or just off shores of continents. Coral beds are the nurseries for small fish, who in turn are in the feeding chain for larger fish, the kind humans use for food. Besides natural disasters, such as hurricanes, that can devastate coral colonies, man-made destruction — by the massive anchors of cruise ships, agricultural runoff and dock development — is increasing.

An eccentric billionaire, Jay Taylor, arrives on the island with the stated intent to save the coral. He’s planted sensors in the water that can detect problems, and he also pledges a million dollars to the Caymanian government for coral recovery and protection. But Tanya, a marine biologist well-versed in protecting the coral environment, has her suspicions. Free help is nice, but it could mean strings attached.

Mike, ostensibly along for the ride, helps his friends assess the state of the coral. He and Kelly dive to begin the survey and are almost killed when an off-course cruise ship drops anchor nearly on top of them.

Each link in the anchor chain weighs hundreds of pounds. Besides nearly ending their lives, massive amounts of coral are destroyed — and also Bubba, a huge, 1,000-pound grouper, who is considered an “old man of the sea.” How can such a massive ship be off by 100 feet coming in to dock? Could the drone flying overhead have anything to do with it?

And after Tanya is nearly killed in a bizarre car accident — also when a drone is present — the three, led by Mike Scott, begin a race not only to save the coral, but also the international banking systems that are present on the island — more than 600 banks where billions of dollars are at stake. Someone masterminds a complete shutdown of all electronic interaction with the world, essentially erecting a “cone of silence” around the island.

Douglas’ own decades of scuba diving provide a realistic environment. Perhaps my favorite passage was the swim through the coral “tunnel” with its “windows” (gaps in the coral wall) that allow sunshine to come through, which is crucial for coral growth.

“Return to Cayman” is a good summer read — fast and furious — with the occasional slowdown to admire the scenery. In true thriller fashion, the novel provides not only an exciting ride, but a greater awareness of what’s happening in our oceans.

Long live the coral and Bubbas of the sea! And maybe then we’ll thrive too.