You are here: Home / Adventure / The truth about sharks 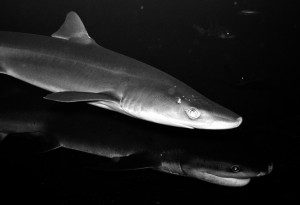 About this time last year, I wrote about the upcoming Shark Week and why I thought it was important to understand sharks…even for those of us living in West Virginia. And then the week aired and it was terrible. It was sensationalized, fictionalized and false. I was thoroughly disgusted.
Sharks are apex predators, just like lions, grizzly bears and wolves. They live at the top of the food chain and keep animals lower on the food chain in check. The most famous example of the need for apex predators is Yellowstone National Park. When the park service reintroduced the gray wolf, elk became less abundant and allowed willow, aspen and cottonwood to grow, creating habitat for beaver, moose and other species. We have learned those lessons and stopped indiscriminately killing lions and bears and wolves on land. Unfortunately, we haven’t learned that lesson about sharks. 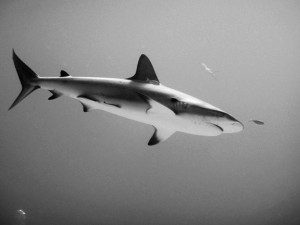 The 1974 book (and 1975 film) “Jaws” scared people out of the ocean, afraid killer-attack sharks were coming to get them in their bathtubs. Peter Benchley, who wrote the book, said later if he had known the truth about sharks, he never would have written the book. He spent much of his later life working for ocean conservation, including protecting sharks.

I often see people post pictures of fishing trips to the beach and they proudly display three- or four-foot Sand Tiger sharks they caught from a pier as if they have accomplished something noble. In fact, all they have done is help throw the ocean out of balance. A few weeks ago a swimmer was bitten by a Great White shark in California. He said afterward that he had swam there his entire life and never seen anything like it. It turned out that people were throwing bait into the water off a pier to bring the sharks in. Right next to a swimming beach. 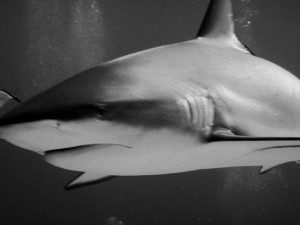 Realistically, though, anglers aren’t the real problem when it comes to sharks. In some cultures, shark fins are considered a delicacy so commercial fishing boats catch sharks, cutting their fins off and then throwing the rest of the animal back into the water alive to drown. It is called shark finning and by some estimates finners kill hundreds of thousands of sharks a year.

As a species, humans rely heavily on a healthy ocean. It controls our weather, provides food and gives us the air we breathe. It is a place we love to visit in the summer to get away from home. No one knows what will happen if the ocean is out of balance, but I can’t imagine it will be good.

If you want to learn more about shark finning, there are dozens of resources online. Working with Scuba Diving Magazine, I just released a short story that deals with shark finning called “Sharks on Land”. The story is free to read online. Or you can find the link to the story on my website. I wrote the story to entertain and educate at the same time.

As a bonus, the story features Mike Scott, the main character in my adventure novels. You can read a short story for free and see if you might be interested in reading one of the full-length books..