You are here: Home / Uncategorized / Awareness of water 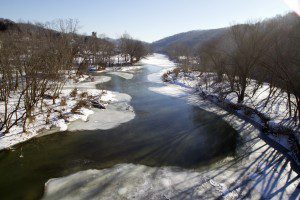 Since the chemical spill into the Elk River on January 9, 2014, I’ve been (somewhat) patiently waiting for things to return to normal. I expected the “smart” people to figure out what to do and to get this all cleaned up. I’ve been certain that our elected leaders would take this as a wake-up call and step up and strengthen protections for the water and air we all take for granted.

There have been mistakes and missteps, and I’ve given those leaders some latitude insisting that no one knew anything about the chemical dumped into the Elk and so it wasn’t realistic to expect they would have all the answers. They were making judgment calls based on the limited information they had.

And then nearly a month after the spill, there was another uninspiring press conference of half answers and the chemical showed up in five more schools, closing them for a day and sending people to the hospital and more home complaining of burning, itching eyes. And I went out to one of the water buffaloes (that only returned due to public pressure) and refilled 15 empty gallon water jugs for my family to drink.

Right after the spill, a friend of mine began a social media post with the phrase “I’m not a tree hugging environmentalist, but…” before going on to explain why the situation with our water should have been caught earlier. I get what he was trying to say, but I got turned off at the opening phrase. Maybe we need to become rabid, tree-hugging, fighting for our very livelihood environmentalists. No one else is going to do it for us.

This isn’t a political issue and it shouldn’t be about political parties. President Richard Nixon signed the National Environmental Policy Act and I don’t recall anyone every accusing him of being a tree-hugger.

Water is all around us and we take it very much for granted. Or at least we used to…before we started looking at our water taps suspiciously.

Do we need another Silent Spring? I think we have the equivalent of the Santa Barbara oil spill. Frankly, at this point, I don’t want things to return to “normal”. We should all be saying “Never again!”  I’m ashamed I haven’t been more vocal or angrier about this, but I think that, too, has ended.

(I wrote this about a week and a half ago, and it just now ran in the paper. Such are the nature of deadlines when writing for a weekly section in the paper. This guest commentary from Dayton Carpenter ran in today’s Charleston Daily Mail and I think this is the first person I have read who really makes sense on the subject. No hysteria. No over-reaction. No defensiveness. Just facts and common sense.).