You are here: Home / Documentary / Back in Russia! 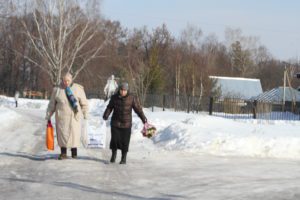 It’s been a little over two years since I’ve been here, but now I’m here for my 7th trip to Russia. As I’ve said before, coming here in 1993 for the first time truly changed my direction and my career. It opened my eyes and gave me a greater understanding of cultures around me.

Especially at the time, it became a goal for me to help other people understand that the Russian people were simply people, nearly totally disconnected from their government. I still very vividly remember someone at the newspaper I worked at in the 90s telling me, “We should just kill them all, they are just communists anyway.” I hope that line shocks you.

The downside to coming here is the travel. A 9 hour flight through the night. It’s the best and most efficient way to get here of course, but in spite of all the travel I’ve done I’ve never developed the ability to sleep on planes. Which means I get here totally wiped out. But, I have to tell about the family mom and I are staying with. Vadim, Natalia and Ilya have adopted us for the week. Natalia and her 15-year-old son Ilya picked us up at the airport and brought us to their home, treating us to a traditional Russian lunch, with a twist. They are a very health conscious family and use only fresh ingredients. Natalia is also interested in yoga and they are following Orthodox lent and not eating meat on certain days. All those are changes from the Russia families I met in the 90s.

I was just explaining my purpose for being here to Natasha. When I show my photographs of the Russian people to Americans, I hope that they will come away with an understanding that people are the same everywhere. We all love our kids, we have pets and we do our jobs. But when I show my photographs to the Russian people, I hope it helps them remember and realize just how far they have come in the last 15 years. Supermarkets are popping up everywhere, foreign cars clog the roads and single family homes are as common as apartment buildings. It’s a pretty astounding change from the way things were just a decade ago.

So, no pictures yet, haven’t even broken out the camera to be honest. But tonight and tomorrow I will and will post when I can. Here is another change for you. Mom was just reminding me that in 1994, I stayed here for three months and my only reliable way to communicate was to send faxes home about once a week. Just quick handwritten notes. Today, I am sitting in a home with a strong wifi connection..