You are here: Home / Documentary / Exhibition in Bordeaux 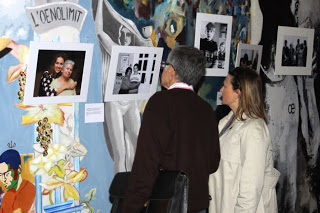 Yesterday was a full-on success. And I had a blast.

The opening for my photo exhibit here in Bordeaux was held at a wine shop/gallery that uses their space to exhibit art. The space itself is only about 6 meters wide, but 60 meters deep. The back two-thirds are used for gatherings, tasting and art. Very, very cool place.

When I arrived in Bordeaux after the typical overnight flight, I was pretty shell-shocked. (Have I mentioned my general inability to sleep on planes?) A very tight connection in Paris had gotten my blood pressure up, but it all went well and I made it here without a hitch. I was fortunate enough to get picked up at the airport by some associates of the group putting on the film festival. It’s mildly amusing that I will just get in a car with anyone standing in an airport with my name on a sign…

From the airport, we went straight to the exhibit because I was bringing my photographs with me. We quickly got things sorted out and hung on the walls. The first three or four sets were in an around the wine racks, but then the rest of the images took over the rest of the facility. When I first looked at the walls, I wasn’t sure how it was going to work. They had had local artists paint murals on the walls and I was a little concerned it would distract from the images. But it really seemed to work and the murals just became background. The name of the gallery is L’oenolimit—emphasis on the No Limit. Great place and two new friends (the owners) as well.

After we got the done, it was to the hotel for a couple hours to rest and change clothes and then back to the opening. There were about 40 people there for the opening, which was a little smaller than in Russia, but there were a great crowd, very interested and asked a lot of questions. We were even able to take a walking tour of the photos with me explaining the groups and the situation. It was a lot of fun. And, of course, the owners of L’oenolimit had set out wines for tasting and one of the sponsors of the film festival had set out a selection of snack. All in all, a great day.

Today will be some sightseeing for the afternoon and then to the opening of the film festival itself. We had dinner with an Academy Award winning director last night who created some new animation technique. Should be an interesting evening.