You are here: Home / Diving / Hyperbaric Chamber/Clinic in La Ceiba

I work in the diving world, representing Divers Alert Network (DAN). So, the primary reason I am here in Honduras is to work with and support the physician that operates the hyperbaric chamber in La Ceiba. His name is Elmer Mejia. And I have to say, he is one of the good guys.

Dr. Mejia set up his chamber clinic just a few short months ago, but has already become part of the community. He is available to treat sport divers, but his primary clientele for his hyperbaric chamber are harvesting divers from La Moskitia. These divers dive to collect lobster and conch, but more about that later. For now, though, I will say he is operating one of the busiest chambers (already) in the Caribbean and is saving lives. There is no question about that. 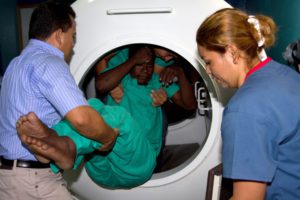 But what amazes me is the thriving/booming family practice the man has created in a few short months as well. Dr. Mejia picked Dr. Nochetto and I up around 11 am and informed us that he had already seen 17 patients and was going to be treating a diver this afternoon. We passed up a dirt road and discovered a very comfortable clinic built out of small house in a slight hill. It was quiet when we arrived, but didn’t stay that way for long. While Dr. Mejia led us around and showed us his chamber, his staff prepared for a four hour treatment on the divers. After that got going, locals began streaming in the door, one and two at a time. They came to see the doctor.

Dr. Mejia’s clinic is in what he described as the poorest part of La Ceiba. He positioned it where he did for two reasons. He is within a few minutes of the airport in case an injured diver comes in that way. But, as he noted, he practices family medicine and he wanted to be where the people needed him. By the way, he said as many as three out of every 10 of his patients can’t afford to pay him for his services. But he treats them anyway. You might think he makes up for it by charging his paying patient’s more. That’s not the case, either. He does his best to keep the price low for everyone.

In a time when the cost and availability of medicine in the US is bringing people to blows and dividing neighbors, its pretty amazing to see a doctor who simply cares for his patients and their health. He just makes it work..