You are here: Home / Books / Keep on, keepin’ on: Learning lessons from Jean Hanna Davis 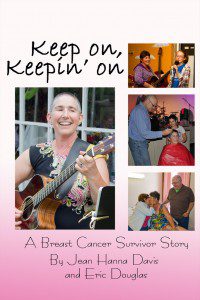 About this time last year, Jean Hanna Davis’ world was about to be turned upside down…again. She was diagnosed with breast cancer for the second time in 10 years. What followed was a mastectomy to remove her remaining breast, radiation and chemotherapy.

Talking to Jean last summer, I offered to do anything I could for her. In the back of my mind, I was thinking we could get together and take some photos if she was feeling down. What she offered blew my mind. She suggested I come and sit with her during her chemo sessions and together we write a book about the experiences of going through cancer.

What followed was a six-month journey where Jean, and the rest of her family, spoke honestly and directly to me about their faith, fears and frustrations. There were funny moments, too. That time together resulted in Keep On, Keepin’ On: A Breast Cancer Survivor Story.  As we said on the book cover, it isn’t all sunshine and roses, but it is a real look at the process.

In interviews, chemo sessions and email exchanges, Jean gave me much more than I ended up giving her. She inspired me. She encouraged me. She taught me lessons.

We all go through rough patches or times when we get frustrated and just want to quit. And that is when we are facing everyday problems, not life or death ones. Jean taught me to “Look for the gifts.” That can be hard sometimes, but Jean talked about times feeling low, sick and tired and then seeing something that would brighten her day or make her laugh. If she had allowed herself to wallow in her pain, she never would have seen those gifts.

The second thing Jean taught me was to “Keep on, Keepin’ on”. That was her mantra throughout her chemo. It means to keep putting one foot in front of the other and keep moving forward. Even baby steps make a difference. The important thing is to not stop. She posted that phrase to Facebook and said it over and over. I’m sure it was partly a reminder to herself that she couldn’t stop and couldn’t go backward. It had the secondary effect of encouraging those around her.

The third thing I learned from Jean, and this time her family as well, was to have faith in God. We talked about faith quite a bit when we got together. We discussed her Grandmom’s articles of faith in the form of several Saints’ medallions and oils, and her father’s faith as an ordained Deacon in the Catholic Church. We talked about her faith, a mixture of the Catholic tradition and the beliefs she was raised on, and the acceptance of prayers from people of all faiths and levels of spirituality.

Keep on, Keepin’ on is now available in print and as a Kindle ebook. We will donate a $1 from every copy sold between now and the Susan G. Komen West Virginia Race for the Cure on May 3.

Cancer patients and survivors can learn from this book. They can gain inspiration and learn a few tricks to getting over nausea. People without cancer can read it and be inspired and learn to accept obstacles. There really is something for everyone inside.

And if you are interested in participating in the West Virginia Komen Race for the Cure, sign up now and get out there..