Originally published in the Charleston Sunday Gazette-Mail on September 29, 2017. 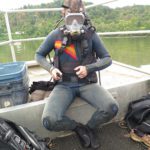 Imagine jumping into the Ohio River, the cool end-of-summer water covering your head, and then descending to the bottom, staying there and searching in the dark through the muck, sand, rocks and submerged trees for freshwater mussels for an hour. 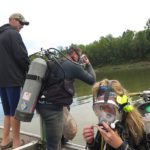 Graduate student Mitchell Kriege is finishing a research project in the Marshall University environmental sciences program. He and a team of researchers, led by Associate Professor Tom Jones, have been diving in the river and then completing surveys of the freshwater mussels they find on the river bottom.

On a recent September Saturday morning, the group met at the university and drove the boat to a remote ramp on the Ohio. It’s difficult to call what the team does diving. They are underwater for an hour breathing compressed air, but they don’t wear fins, and they don’t swim. They crawl along on the bottom, fanning away silt and mud, feeling for mussels.

They find mussels with common names, like black sandshell, three-horn wartyback, pimpleback, washboard, three-ridge, deertoe and sheepnose (which is listed as an endangered species on the federal register.) Zebra mussels, an invasive species they don’t study but that are often attached to the mussels they are looking for, have a razor-sharp edge that causes fine cuts on their hands.

According to Kriege, the eastern United States is the hot spot for mussel diversity in the world. 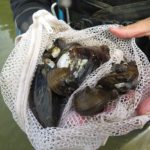 “We are the equivalent of the Amazon rainforest, but for mussels. It is important to study them because they are so heavily imperiled,” he said. 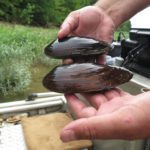 “This project will be the first time we have a statistically defendable estimate of the mussels in the Greenup Pool, or anywhere in the Ohio River to my knowledge,” Jones said. “More species of mussels are federally listed than any other taxonomic group by percentage. Some authors cite almost 70 percent of mussel species have some federal protection due to rarity.”

The research project includes 20 randomly chosen locations on the river. At each location, the team lays out 100-meter-long weighted lines from the bank toward the middle of the river. A diver then enters the water and collects every mussel to be found in a 1-meter-wide swath along that line, placing them in mesh bags.

These swaths are called transects. Every 10 meters, the diver clips off the bag and begins a new one. When finished with the dive, the diver has surveyed a 100 square meters of river bottom. 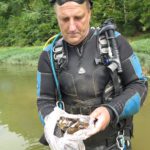 At each location, they make six transects, each one 100 meters downriver from the previous one. For his master’s degree thesis, Kriege will produce maps showing the locations and dispersal of the various types of mussels in the river.

“In essence, they clean our drinking water for us. They also alter their substrates by movement and provide food to other species, both by being eaten and by producing pseudo-feces that bugs and fishes consume,” he said.

Healthy mussels on the river bottom aren’t just a nice thing to have. They benefit everyone. 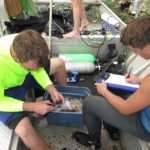 “Each mussel filters anywhere from 5 to 20 gallons of water per day, 24 hours a day, 365 days a year. If one mussel filters 10 gallons of water a day, that’s 3,650 gallons a year. When you get to talking about populations in the millions, you begin to realize how much money mussels are saving the taxpayers,” Kriege said. “Mussels not only clean the water we drink, they act as food for a wide array of organisms — muskrats, fish, etc., and their dead shells act as homes for many macroinvertebrates, fish and aquatic eggs.”

After each dive, the crew brings the 100-meter line to the surface with the mesh bags attached. They carefully measure and identify each mussel and record its statistics, before returning it to the river, where it can continue growing. 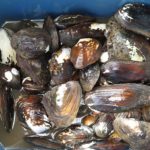 Before they are returned to the river, though, the zebra mussels are pulled loose. Zebra mussels attach themselves to just about anything underwater, including other larger mussels, and can kill them in the process. Removing the zebra mussels gives the native mussels a better chance at survival. Kriege explained that they do this for the mussels caught in the survey since they were dislodged from the bottom in the first place.

“This project has opened up my mind to the incredible number of mussels present in the Ohio River. There are literally hundreds of millions of individuals in our pool with 25-plus species. However, it has also opened my eyes to the sad truth of the incredible habitats and wide array of species we lost when the river was dammed and heavily polluted. About half of the sites we surveyed were heavily impacted by humans and nearly devoid of mussels. Historically their numbers would have easily been in the billions in just a short section or river.”

Eric Douglas, of Pinch, is the author of “Return to Cayman,” “Heart of the Maya,” “Cayman Cowboys,” “River Town” and other novels. He is also a columnist for Scuba Diving Magazine and a former Charleston Newspapers Metro staff writer. For more information, visit www.booksbyeric.com or contact him at Eric@www.booksbyeric.com.