You are here: Home / New Releases / Stingy Jack-o-lantern and the will-o-the-wisp 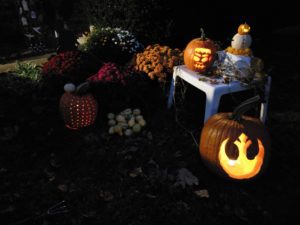 If you want to read the column, you can find it here.

A light in the distance

Is that a traveler ahead? I can’t quite make him out.

It must be. I see his light. It keeps moving.

I don’t know why anyone is out on a dark night like this.

Yes, but not by our choice.

Call to him. Maybe he will guide us.

I did, but he doesn’t answer. He seems to keep moving away from us.

Hurry along. We’ll catch up to him. We’ll be safer traveling together. We don’t know these roads and our light is failing.

The road ahead is getting soft.

The traveler made it this way, didn’t he?

You’ve tricked me, Jack. Not many men can say that.

Don’t be embarrassed, Devil. Not many men are like me.

In spite of those you’ve cheated, for releasing me, I promise I won’t take you to Hell when you die.

Then it’s to heaven for me?

Well, no. I promise I won’t take you to Hell. But He didn’t say He would take you in, either.

What’s to become of me?

You’ll walk the earth for eternity. As a boon, I’ll give you a burning ember to light your way.

How will I carry it?

In a pumpkin, of course.

This is the fourth year for Halloween fiction and flash fiction. You can read the previous years, and stories from other writers who participated in my annual call for stories, on the Free Fiction page.