You are here: Home / Books / The real Mike Scott 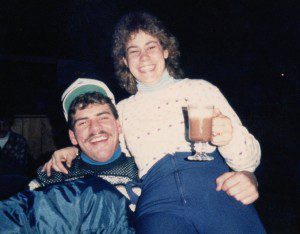 Twenty three years ago today, April 25, 1989, Michael Scott Burnsworth lost his battle with cancer. I was at Marshall, working at my work-study job when I heard. It was tough news to swallow although we all knew it was coming. Mike was a year older than I was and one of my closest friends. We’d been through a lot together. Way too many late nights running the roads, cruising in the Trans Am with the t-tops out, washing and detailing Mike’s car before going cruising at Ritter Park in Huntington or Coonskin in Charleston, chasing women and generally being delinquents. 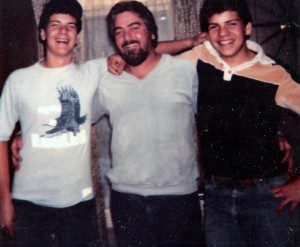 Mike was 22 years old when he died. He was taken much too soon. A few days later, I was a pall bearer at his funeral. I’ll never forget my brother Stuart calling the radio station as we left Charleston, headed to Fairmont for the funeral and requesting Elton John’s Funeral for a Friend. Music was always a big part of our lives and it always helps.

For a long time after that I looked around for a way to deal with that loss. I promised him I would never forget him. In 2004, when I began writing my first novel, there was no question in my mind what my hero’s name would be–Mike Scott. I’ve published five more novels since then; all with Mike Scott as the central character. He even showed up in the short story Queen Conch and the free short story Land Sharks. It makes me smile to think of Mike when I write his name. The physical description for the character is how I remember Mike and how I believe he would have grown up. Would he have been a diver and traveled the world like the character in the books? No clue. But he would have had fun wherever he went. I’m sure of that. He always did. That’s what I remember most about Mike, his sense of humor and his laugh.

There is never anything good about someone dying of cancer and even less positive from someone dying just as his life was about to start. But the lesson I learned from it was to not settle for anything, not to give up and to always keep pushing. It’s sort of ironic that just yesterday I was having a bit of a crisis of confidence—nothing terribly uncommon for a writer. I was questioning if I was heading in the right direction and doing what I should be doing. I had thought about writing this blog, but then decided not to. (It was probably about the same time that the crisis of confidence began.) Last night, Mike’s brother Mark posted a comment about Mike’s passing and added a few pictures of Mike as well. And then I remembered what I’m supposed to be doing and why. I’ll take that as Mike’s way of kicking me in the butt, telling me to quit whining and get to work.

I hope I’ve made Mike proud. There’s no doubt in my mind he is watching over all of us down here who knew him; his family and his friends.