You are here: Home / Documentary / Time zones and time

It’s about 7:45 am as I write this, but pushing midnight at home. Got a decent night sleep, but probably not as long as I should have. On the other hand, waking up at 7:30 in the morning, I guess, means I’m already shifting to this time zone. I’ll probably end up napping in the car again though. 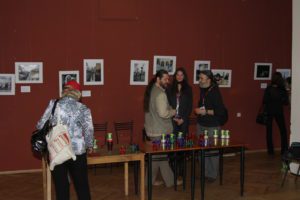 Last night, we drove back into Moscow to take my photographs to the House of Cinema where the film festival will begin tonight. My portion of the exhibition doesn’t actually begin until tomorrow (Saturday), but with everything else going on, they wanted the prints early and I certainly couldn’t blame them.

Walking into the facility last night was amusing. As we entered, we were met by two little older woman and a man, who came out of a side office and immediately began telling us why we couldn’t enter. A quick call to Elena the organizer of the event and we were rescued and whisked inside. My hosts, Vadim and Natasha both commented that they had a very “Soviet” mentality. They didn’t know who we were and were essentially the gate keepers, positioned to deny access to everyone until someone who knew more or had more authority interceded. The exhibit hall itself is definitely Soviet era construction. It’s always amazed me, and Mom was picking up on this last night, too, that Moscow is about 1000 years old and there are buildings here that are 400 years old or more that are still in daily use, and then there are buildings built during the Soviet period that look like they may not last another 10 years. Not that the House of Cinema was unsafe or falling apart, just that it looked tired.

Before we went into the city last night, and some during the car ride, (traffic here is pretty incredible. Even leaving at 7 pm to drive into the city we ran into heavy traffic) as we talked Vadim wanted to make the point that 15 years go when I began this project Russians were tuned into survival and making money. Today, as many of them are affluent and their lives are changing, they are beginning to pursue their own spirituality as well. Natasha his wife has been baptized as well, although she admits she is less interested in the church than her husband, but Vadim takes it very seriously. Remember, though, that most of the Russian people didn’t have access to churches and were forbidden from even attending church until the mid-90s. New churches here are being built here every day.

After the dropping off my prints, the four of us grabbed a light dinner at a small, very quaint café downtown named in honor of the Russian poet Sergey Yesinin. I’ll have to learn more about him when I get home. The Russian people have always had great respect for their poets, though. And from there, we took a quick walk across Red Square at midnight. It was a cold clear night with a stiff wind blowing, but people were still out walking. The lack of clouds in the sky made the ever-beautiful St. Basil’s cathedral stand out even more dramatically against the sky. And then home and to bed, with a quick Skype call to speak to one of my daughters. A little touch of home before bed.

And now off to begin a new day..